Iron Maiden's going to get you.... 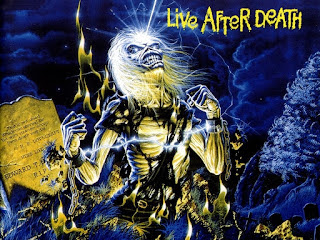 In 1985, Iron Maiden released "Live After Death", an album recorded on the Long Beach date of their "World Slavery Tour". It captures the band at the height of their powers and for many fans, myself included, it is their definitive live recording. As Bruce Dickinson proudly told us at the start of tonight's show, remarkably their first stadium date in the UK and some 23 years after that night in California, Iron Maiden are bigger in 2008 than they have ever been in their entire history. For a band formed in 1975 and with in excess of 80 million albums sold, that's quite a statement, and yet the "Somewhere Back in Time" tour has seen the band playing enormodomes across the world, in places as far flung as India, Australia, South America, North America and Europe. They may never have been especially fashionable, but there's no disputing that Iron Maiden are massive.

I've seen Iron Maiden play a number of times over the years, including a memorable day at the Monsters of Rock Festival at Donington Park, but it's been at least fifteen years since the last time, and I was curious to see how much the band had changed. 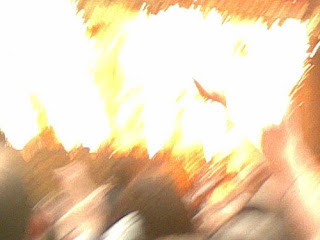 Maiden take to the stage

Not very much, is the answer. The staging is practically the same as the one used on their "World Slavery" tour back, and the setlist too is almost identical to the one captured on "Live After Death". Well, that's no bad thing: the last Maiden album I bought was the distinctly underwhelming "No Prayer for the Dying" back in 1990, and it's probably best to draw a veil over the Blaze Bayley years (no matter how much I loved Wolfsbane, it still looked like a move that had spoiled two bands). The more old material they played, the better.

I go back a long way with this band, and I walked into Twickenham with Graham, Mark, Stef, Gordon and Giles in a state of some excitement. Looking around, two things became immediately obvious:

2) my assumption that the audience would be made up of ageing rockers with denim jackets with patches was at least partially wrong: there were plenty of those, but there were also quite a lot of kids too...from teenagers all the way down to 7 or 8 year olds. All wearing Iron Maiden t-shirts, obviously.

The support that I saw were distinctly average and the irony of a band called "Avenge Sevenfold" doing a peace song called "Gunslinger" seemed to be lost - especially on the band themselves. Oh well. They weren't on for long, and I actually started to warm to them when they ended their final song prematurely as the lead singer stopped so and urgently called for security to help someone in distress in the front row. An anti-climax for the band, certainly, but a gesture worthy of a bit of applause, even if I was pleased to see them leave the stage. We shuffled our way a bit closer to the stage, hopefully just outside the range of beer throwers, and settled in for the headline act. 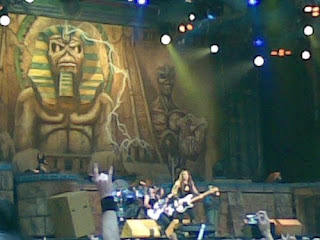 The magnificent Powerslave set, complete with anubis. Eddie not pictured, but lurking behind the sarcophagus. Note the international hand signal of rock....

Maiden came on to a bit of Winston Churchill and a flurry of pyrotechnics before launching into "Aces High" and straight into "2 Minutes to Midnight". It's the kind of the thing that no-one does better than Maiden: a barrage of drums, driving bass, a barrage of guitars and an absolute air-raid siren of a voice.

"Scream for me Twickenham!"

Ridiculous. Preposterous, even.... but brilliant. The crowd went predictably mental and sang along furiously as the Reed brothers carried out their own private air-guitar duel just in front of me.

The pace of the set then changed as they played "Revelations", and I started to get distracted by the drunk guys standing next to me. It's perfectly natural for people to have a drink at a gig, of course, but these guys were absolutely legless and they were far from the only ones. They spent all of this song attempting to put coins and empty Jack Daniels miniatures into the hoods of the nice couple standing just in front of them. When they got bored of that, they took to launching almost full bottles of beer (£3.50 a pop) into the crowd standing in front of them. To be honest, this started to get on my nerves. If you'll forgive me getting all sanctimonious for a moment....How fucking dare they? What on earth gives them the right to behave like that? I actually started to get really angry with them, but obviously I wasn't going to say anything to them about it. I was angry at how selfish they were. Not only were they threatening to spoil my enjoyment of the gig, but they were annoying the couple in front of them and were presumably not doing the people hit by their beer bottles any favours either. I'd be surprised if they remember much of the actual gig at all.

A stonking version of "The Trooper" soon brought my attention back to the band, followed up by "Wasted Years" and a barn-storming "Number of the Beast" which saw Satan himself appear on the stage surrounded by gouts of flame that I could feel from 100m away. I know it's a crowd favourite, but a 15 minute rendition of "Rime of the Ancient Mariner" then took all the wind out of the pace of the set, and the idiots next to me started to divert my attention again, and this time I found it harder to push them out of my mind and focus on the band. This was a shame. They might have been going for twenty-five years, but Maiden are still a relatively dynamic live band. They sound great: Dickinson still charges around the stage with an energy that would shame a man half his age and has an incredible voice - have you tried singing any of this stuff? Nico McBrain hammers seven bells out of his massive drum kit; the three guitarists can barely keep the smiles off their faces and Steve Harris still sticks his foot on the monitor and strafes the audience with his bass. Brilliant. Incidentally, after all of this time playing his bass without a pick, it occurred to me that Harris must have the hardest fingers in the world... hewn from rock itself, perhaps. Anyway. 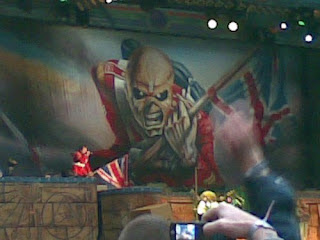 The Trooper: note Bruce Dickinson with matching top and flag

They're a great band and it was a decent set, but my mood was irretrievably on a downward spiral now, and I started to think about how inconvenient a venue Twickenham is. It's certainly a magnificent stadium, but to get back to our hotel, I was going to have to queue up for a shuttle bus to Richmond station, queue up for a tube and then hack my way back into London. The band finished up their set by playing "Run to the Hills", "Fear of the Dark" and "Iron Maiden", and I said my goodbyes and wandered to the very back of the pitch to get a pint and to watch the encore. It was cold, windy and I've never much liked "Hallowed by thy Name", so when they started playing it, I drained my pint and headed out of the stadium. I had a touch of lingering guilt that I wasn't there to watch the final notes ringing out, but this was somewhat mollified by the fact that there was no queue for the buses, no queue for the tube and I was back at the hotel in less than an hour.... thus probably saving myself a couple of hours. Still....

As I sat on the tube listening to White Denim, my mood was black: I thought that Iron Maiden had paced their set poorly but had otherwise had been pretty good. I was cursing those idiots in the crowd though and was in the process of allowing them to ruin my memories of the band. It was at this point though, that I spotted a young girl sitting across the aisle. She was probably about twelve years old and as she was wearing an Iron Maiden t-shirt under her hoody and was clutching an Iron Maiden scarf, had clearly just been to the gig with her mother, father and grandmother. That was nice enough, but what absolutely made the moment for me was the fact that she was quite clearly in seventh heaven. She looked so happy and thrilled to have seen the band that it was simply impossible for me to stay in a bad mood. I won't say that it completely rescued my night, but it did make me think again about how much Iron Maiden's music meant to me when I was thirteen years old, and I resolved to do my best to ignore the morons and just remember the surge of excitement when the band came onto the stage and played all those brilliant, brilliant songs. They're a ridiculous band in so many ways, but I love them and I love what they have meant to me over the years.

'Aces High'
'2 Minutes To Midnight'
'Revelations'
'The Trooper'
'Wasted Years'
'The Number Of The Beast'
'Rime Of The Ancient Mariner'
'Powerslave'
'Heaven Can Wait'
'Run To The Hills'
'Fear Of The Dark'
'Iron Maiden'
'Moonchild'
'The Clairvoyant'
'Hallowed Be Thy Name'
Posted by swisslet at 22:07