A bald skinny bloke and his lovely girlfriend 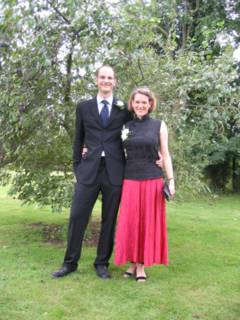 I think I can safely say that I have never been to a wedding I have enjoyed more. Everything went so well, starting with the weather, which was nice all day.... the garden looked absolutely splendid, the food was delicious and the booze freeflowing. I'm not big on ceremonies that make glib promises about "forever" (how can you promise to do anything forever? You can promise to try, but I suppose that's not very romantic is it?) anyway, it was nice.

Alice's mother, father, brother and sister were over from Korea for the occasion and I discovered that they take the idea of extended family VERY seriously. Our two families are now joined, and this is very important in Korea. Alice and David will be having another ceremony in Seoul in May, and Caitlin and I have been invited to attend. Naturally, I thought for about a second before accepting without reservation. It is, after all, another Olympic city to cross off the list ("one of the tricky ones" as JVP kindly pointed out). Apparently, a man of the stature of Alice's father will be expected to invite about 1000 guests...

Anyway. I could go on at length about this, but it won't make very interesting reading.

The house was so full that we had to stay in a farmhouse down the road, but I suppose you can't have everything, right (although it was a bit weird - Mrs Adams last saw me when I was about 7, and I think it's fair to say that I have grown a bit since then)