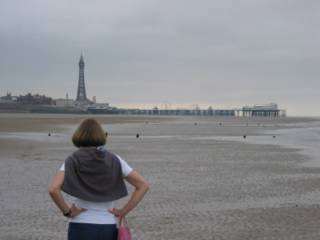 I don't know whether this is amazing or not, but I've never been to Blackpool before. Well, I've been there now, and to be honest I'm not too sure that I will be hurrying back. It's a shithole and no mistake.

Perhaps I should explain - I did have a valid reason for being there and wasn't just visiting to have a weekend at the seaside. Regular readers may recall that I was railing at the ridiculously obscure tour dates that Morrissey had announced (Bridlington, Perth, Blackpool...). Well, I bought a couple of tickets for the Blackpool Empress Ballroom date and booked a room at the Savoy. Tootled up with C at some point on Saturday afternoon (it's only 2 1/2 hours - so handy!) and checked in. The Savoy sounds very grand, and is in quite an imposing building on the North Shore at Blackpool. Think faded glamour. There was a wedding in full swing when we arrived - I had a quick peak around the door (as you do) and noticed that the tables were named apparently at random after towns. We had a "paris" - fine. "Miami" - fine. Then we had "Key West" - hmm. Not exactly a major metropolis and also in Florida. Perhaps it's where the kids were conceived?

Anyway - dumped bags and went exploring. It's about a mile from the Savoy up towards the tower and the north pier, so we walked it. The tide was in, and the sea was muddily thrashing against the wall. Not much golden sand here. Pleasant enough potter in, but as you near the town proper... the full horror becomes apparent. You know how there's an element in every British town that go out on a Friday and Saturday night and get horrifically drunk, stagger around in packs, piss in the street, shout a lot, have homemade tattoos and are generally pretty unpleasant? Often wear Burberry caps? Well, apparently they all go on holiday and let their hair down in Blackpool. I was interested to see that they really do wear "Kiss me Quick" hats as well. Roving packs of stag and hen dos wander the streets wearing a uniform of some kind (t-shirts and the like - one group of girls had cowboy hats & holsters with a dildo in them, which I thought was especially nice). There are vending machines in the street selling such delights as an "all in one lace sex suit" for £1 (Vicky bought one of these on the way home after the gig, and I confirm that in fact this is not made from lace).

Picked my way carefully through this lot and went to scope out the venue. The Empress Ballroom is inside the Blackpool Winter Gardens and is splendid. It has a sprung floor and chandaliers. It's a total throwback to when Blackpool was something of a more traditional Engish seaside town and people went out dancing and things like that. Anyway - doors weren't until 7pm (it's about 5pm by now) but gathered outside were the hardcore fans. Smiths t-shirts, quiffs, national health specs and a general "I'm more lonely and alienated than thou" look about them, I have to say. Didn't hang around and grabbed some Harry Ramsden's before heading back to change and stuff (mmm. fish n chips!)

Got back to the venue about 8pm (and ironically, although the support band were on and doors had been open for a couple of hours, if I had so desired, I could have walked right up to the stage.... but I suppose for that bunch it's almost more important to be SEEN as a the most devoted fan than anything else. They seem to all know each other anyway, and they're all fiendishly jealous of someone called Julia, who Moz namechecked both here and at Glastonbury.)

Support was Clash-wannabes and we ignored them, met up with Vic, Doug and their mates Michael and Sharon, and queued at the bar for beer.

Moz came on about 9 and opened up with "How Soon is Now", which let's face it is a pretty splendid way to start. Great song.

Not too dissimilar to what he played at Glastonbury (with the notable additions of November Spawned a Monster & Now my Heart is Full - the latter being especially gorgeous). It was just BETTER though. Smaller venue for sure, but he just seemed a lot more comfortable and chatty. I suppose not having a bunch of Muse fans down the front telling you to sod off is probably helpful. The acoustics of the venue were a bit boomy, but I thought it was great. I've been waiting to see Moz in a venue like this since the "Vauxhall and I" tour in about 1995. How was I to know he wouldn't tour again for 8 years? Somehow I knew at the time that I would regret it.

It was like a bloody oven mind. Moz went through 4 shirts (and yes, I can confirm that he is in pretty good physical shape). As I said, he was positively chatty. The album was called "You Ate the Curry", he sang "In the Darkened Underpants..." during TALTNGO and spoke of his joy that "How Could Anybody Know How I Feel?" was played in the Rovers -again- during "Constipation Street". He also amusingly trod in some chewing gum, leading to a very un-Morrissey-like "Oh Shit! Chewing Gum!".

All in all, I'm very, very pleased that we made the effort. The end was great - as they finished off "There is a Light..." at the end of the set, the band too it in turns to leave the stage - Morrissey first, then Boz, then the bassist etc. etc. with the sound slowly being pared down until we were left with just the keyboards, and then nothing. Great way to end the gig.

I'm sort of hoping he'll do a bigger tour in the new year, but I think this would be hard to top.

You can picture the scene as we all piled out of the venue though - 3000 morrissey fans in with their gladioli tumbling feyly out into the hideous carnage of downtown Blackpool on a saturday night at about 11pm. Talk about culture clash...

Still - the next morning I was able to get a bit more of a glimpse of the old seaside town. C and I went out for a stroll along the beach at about 09:30 am when it was pretty much just us and the seagulls. The tide was out, so there was quite a lot more sand about the place, and it was actually quite bracing and nice. Checked out and scarpered though. Can't say I've really got any plans to hurry back for a long weekend!