Carry on up the Acropolis 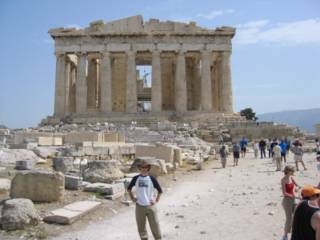 Miracle of miracles, I managed to get Mik up relatively early in time to come up the Acropolis with me (repeat after me, the big rock is the 'Acropolis' and the famous temple I'm standing in front of here is the 'Pathenon' - now you know, don't make the same mistake that everyone else seems to make.)

Still, managed to make sure that I was climbing up at the hottest part of the day (noon) and it was roasting. It's nice. There's a lot of renovation going on at the moment, mostly to get rid of some earlier attempts at renovation in less enlightened times (so cleaning off all the nasty rubbish like cement that they used to fill stuff up, and using things like marble to replace it). I was slightly alarmed to see that the Greeks seem to have some plan to actually rebuild some of the ruins "as they would have been", which sounds like an appalling idea to me.

As usual with a monument like this, it was absolutely crawling with tourists. The little museum at the top was filled with those people who move from statue to statue, looking solely through the viewfinder of their camera/camcorder, and never really pausing to have a good look with their own eyes. As a tourist myself though, I should obviously be mindful that I was essentially there to have a gawk as well.

Fact of the day: The Parthenon was originally painted in many colours. Looks better now then, in my opinion.

Clambered down, gathered up my bits and pieces, had a final beer in our local before heading off with Mik and Rich for the airport. Not much to report about the flight back really, apart from the fact that we were on the same flight as most of the British Triathlon team, Linford Christie (flying economy on hellas? and before the 4x100m relay team's triumph the following night?) and also behind a chap who I finally recognised as the former chief exceutive of the Boots Company - Steve Russell. Small world.

I had the distinct pleasure of sitting between Jo and her charming and chatty 11 year old daughter Demi on the way home. I had given up my window seat to Demi, but as Jo is terrified of flying, I sat in the middle. Marvellous company they were too. Demi chuntered away to me for 4 hours, and played on her gameboy, and I had a nice chat with Jo. Lovely people, and they really brightened up what might have been something of a depressing journey.

Landed at 22.30 or something and pottered up home - dropping Mik off on the way and finally getting home at 2am or something. Yawn.

Brilliant holiday, and I have to say, it was rather strange watching the games on telly the following night (when Kelly won the 1500m and the men's 4x100m team won the gold). I suppose it was doubly-weird because John, Scat and Rob were there, and I had been the one who had found them the tickets. Fair play to them I say.

A great games. In spite of all the slurs thrown in their general direction, a games that the Greeks can be proud of.