Do you think you could raise enough to save your skin? 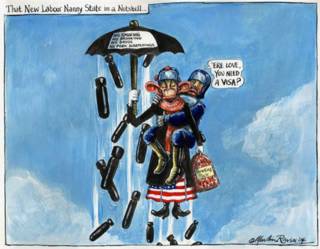 [cartoon blatantly stolen from Martin Rowson at the Guardian. Credit where credit's due etc. Click to enlarge]

David Blunkett is many things. He is the British Home Secretary. He is from Sheffield. He is blind. Indeed, he is the first blind man ever to reach the Front Bench of the Government. He a has a lovely guide dog called Sadie, who replaced a lovely dog called Lucy. He is a prime mover in the proposed reclassification of Cannabis from a Class 'B' drug to a Class 'C' drug. He is the scourge of asylum seekers to the UK. He is determined to bring identity cards into the UK. Most recently he has announced proposals for new anti-terror laws including the proposal to remove the right to trial by jury in some cases (as discussed on this blog).

I've said it before, but I have a deep-seated unease about these laws. Plenty of people don't think that carrying an ID card is such a big deal, but I'm afraid I do. It is my right to walk around in this country without needing to be able to prove who I am. Do we need to give the police the justification to stop anyone they want at any time? Besides, how does it help to stamp out the terror threat exactly?

Recently we found out that David Blunkett had been having an affair. He's not married himself, but, his girlfriend is. Anyway, so far so boring - and pretty unlikely to damage his career. Some new allegations have emerged that could possibly put his job on the line. Apparently he intervened in a visa application for the nanny of his ex-lover. As the minister with the overall responsibility for immigration, this is potentially a big deal.

I was delighted. What's the word? Shadenfraude.

Blunkett has set up an immediate enquiry into the matter, but frankly, why do we need to examine the facts of the case? Why do we need a group of impartial witnesses to go through the evidence? Why can't we just act and throw the man out of his job and into some kind of internment? That would teach him. Wouldn't it?

The press are getting predictably excited about this, but from what I can see, sadly he is probably guilty of nothing more than stupidity. In a world where we have been taken into an unpopular and unjustified war, I just can't get excited about this (or the fact that Stephen Pound apparently spends over £100,000 on travel expenses despite being an MP in Ealing travelling to a Westminster parliament)

The worm is turning on this government. The signs are there that the gloss from 1997 has almost entirely disappeared now. Blair is pretty embattled on all front.

Sadly I still feel like I don't really have an alternative. Michael Howard? Do me a favour.

Meanwhile, in America, I found this (through this).

On a more positive note for US/UK relations - a big hello to Jenni. She's contributed to the creation of this post, and I thank her for her assistance, and acknowledge her creative input....