Such beautiful dignity in self-abuse 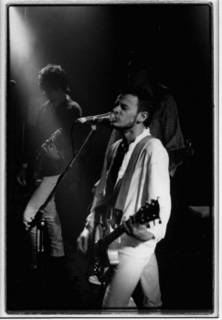 There was an article in The Observer yesterday about the 1994 release of the Manic Street Preacher's finest hour - The Holy Bible. The article portays the release as the unwelcome guest at the Britpop party of "a Britain clad in sportswear, drunk on premium lager", and talks about the forthcoming 10th anniversary edition of an album that only sold 35,000 copies on its release, but has apparently sold steadily at a rate of 15,000 copies a year since (reissue!repackage! re-evaluate the songs! double pack with a photograph, extra track and a tacky badge!) .

It is without a doubt one of my favourite albums ever. I saw the Manic Street Preachers at the Reading Festival in August 1994 - prophetically, they were forced to take to the stage without Richie Edwards, who had taken refuge in a clinic as his physical and mental state continued its inexorable descent towards his eventual disappearance on 1st February 1995. I've seen the Manics many times, but I think that this was to be the only time that I saw them perform the material from this album live, and the effect was electric. I've always been a lyrics man, and for the manics it has always been about the lyrics. I was gripped by lines like:

"I am an architect. They call me a butcher" (Faster)

"I eat and I dress and I wash and I can still say thank you / Puking - shaking - sinking I still stand for old ladies / Can't shout, can't scream, I hurt myself to get pain out" (Yes)

"Scratch my leg with a rusty nail, sadly it heals " (Die in the Summertime)

Nicky Wire freely admits that 75% of the lyrics were written by Edwards. Many of them are hard to write down here, and some are definitely difficult to listen to - all that pain set to howling guitars, with the words squeezed into the music by a gabbering James Dean Bradfield. It's hardly surprising that these don't form a staple of the Manics live act.

On the way back from Reading, I stopped in Milton Keynes to buy the album, only to find that as it was a bank holiday, all the shops were shut (remember that?), so I had to wait until Tuesday.

I listened to the whole album again today, and the sheer visceral impact of it hasn't dimmed over the course of a decade. I'm still not going to buy "Lifeblood" though, I don't think. It's not that I don't like their later stuff, or that I'm one of those hardcore fans who felt let down when they didn't burn out in a blaze of glory after selling 16m copies of "Generation Terrorists".... it's just that I don't think I can face it anymore. I really liked "This Is My Truth...", but they somehow sound like their hearts aren't really in it anymore. I'm loathe to write them off, or say that they should call it a day - I did that a few years ago, and then reluctantly went to go and see them on their Greatest Hits tour and they were **AMAZING**. I'm sure the new stuff is perfectly good (and there is something so reassuringly Manics about the lyric "People forget China and your war on cancer ", isn't there?) and I know of at least two people who will probably vehemently disagree with me about this... (here and here)

Maybe it's my heart that isn't in it anymore. I'm tired. They somehow make me feel sad about what was, instead of uplifted by what is.

Whatever - the Holy Bible is an amazing statement from an amazing band, and this is how I want to remember them.