Everybody start to lose control / When the music is right 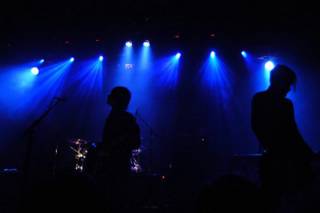 I saw Interpol playing at Nottingham Rock City this evening.

As I think I’ve mentioned several times already, Interpol have been my musical discovery of the year, bar none. Snow Patrol are great, but something about Interpol really chimes with me in a way that Snow Patrol never will.

The first time I heard them was when Zane Lowe played “Slow Hands” on his show one night in July as I was driving home. It must have been fate. I like Zane’s show but I almost never have my car radio tuned into radio one – for me it’s either 5 Live or whatever is in my CD player (which according to my blog entry was apparently either the Kings of Leon or Keane, but that’s not important now…). That weekend I popped into Selectadisc in Nottingham and bought “Turn On the Bright Lights” (also picking up the new Hives album, and deciding to postpone purchasing the Futureheads album – BIG mistake – that’s also in my top 5 albums this year). It doesn’t happen to me all that often, but it was one of those albums that I more or less fell in love with at the first listen.

I’m not sure what it is really. In some ways my music taste is quite predictable (witness me blind purchasing “No Cities Left” by the Dears on Lord Bargain’s recommendation, loving the album, and then subsequently reading them being compared to Morrissey). From this point of view, Interpol are something of an identikit of my music taste: Skinny white guys with guitars, a vaguely doomy sound and lyrics about self-loathing. In a good way….

Thanks to the tip-off from Capt.Damo, I snapped up tickets to the Rock City gig pretty much as soon as they came on sale – ignoring the fact that the timing meant I was going to have to bomb back from Oxford after an enormous Christmas Party on Saturday night to get there in time, and that there was the distinct possibility that I might be feeling, er, a little under the weather.

As it turns out, I was feeling fine and I got home about 7pm and had plenty of time to grab a quick sausage and roast butternut squash & sweet potato sandwich with onion marmalade, and head into Rock City. A couple of friends who had attended the Steve Earle concert the week before had warned me that Rock City had been refurbished (what?) and that there was now even a man in the toilets with various perfumes etc. (what??). I have to say that I didn’t notice any significant differences, which is a good thing in my books, and if there was a man in the toilets waiting to pounce on me as I washed my hands, I didn’t see him (although let’s be honest, I didn’t spend a great deal of time hanging around in there looking for him).

The support was The Secret Machines. I don’t know anything about them, except that the free CD that was thrust into my hand informs me that they received a KKKK album review from Kerrang (“like Pink Floyd minus all the noodly bullshit”) as well as lots of **** reviews from people like Q, Uncut, The Times, Radio Times, Model Railway World…. That sort of thing. They were alright. One of the singers (they are a three piece, but the bassist/keyboardist and the guitarist swap vocal duties) sounded a bit like that bloke from Gomez, which isn’t much of a recommendation I know, but the were okay. I’d give their album a go. They kicked up a hell of a groove, and had a comedy drummer, which always gets you a few points in my books.

Interpol came on all dressed in black and wearing ties, as is their wont, and launched straight into “Next Exit”, the first track from their current album “Antics”. They were fantastic. What can I say? It’s true that they wear their influences on their sleeve (mainly English indie from the 80s - Joy Division, the Cure, Echo & the Bunnymen, the Psychedelic Furs). However, Paul Banks, the singer, has a splendid monotone that makes him sound like a cross between an undertaker, a lawyer and a dalek, but is an absolutely crucial component in their sound and one that makes them sound pretty unique. Speaking of 80s bands, Carlos D the bassist, looks like he should be in Sparks (basically he’s only missing the little moustache). They rock though.

This was the last date of a pretty long tour, and it shows in the way that the band is so tight. They played most of “Antics” and a pretty good selection from “Turn on the Bright Lights” (although not my 2 favourites – Obstacle 2 and Stella was a Diver, but you can’t have everything, right?). “Evil” the new single, and “Slow Hands” the last single were both particularly good. Banter was limited, although Paul did look up at one point when he caught something that someone in the crowd had shouted “What was that? God Bless John Peel? Hear hear. God bless John Peel”. There was a BBC outside broadcast truck outside, actually, so I hope they were there to record the gig. They finished with an absolutely barnstorming version of “Roland”

“My best friend's a butcher, he has sixteen knives

he carries them all over the town

at least he tries

my best friend's from Poland and oh he has a beard

but they caught him with his case in a public place

that is what we had feared”

Absolutely brilliant band and a brilliant show. Catch them if you can.

Special shout out here to Gaye B and to her family. Gaye emailed me a little while ago having found a link to this blog via google when looking for someone who had videoed Interpol on Jools Holland. She asked me very nicely if I would send her the video so that she could use it to create a DVD to send to the States for her daughter’s Christmas present (she’s a huge fan, apparently, but had missed them when they were playing in New York). I was happy to oblige, and bless her if she hasn’t made me a copy of the DVD, and as well as the Jools Holland performances, has added on a whole pile of other live performances. The internet is a strange and wonderful place, but you do run into some lovely people. I hope your daughter enjoys the DVD Gaye and Happy Christmas!

As I mentioned above, I went to the 7th annual Christmas Party hosted by my friends in Oxford on Saturday. It was fantastic as always but one moment in particular stands out for me…. We had just finished dinner (turkey with all the trimmings) and were sitting around the table chatting and listening to music… suddenly we all spontaneously burst into song. If you had walked past the window at that moment you would have been confronted with the slightly bizarre sight more than 20 thirty-somethings sitting around a table wearing party hats and singing along to “Dancing on the Ceiling” by Lionel Richie, which was then followed up with “500 Miles” by the Proclaimers and a cheeky burst of Ray Parker Jr.