that damp and lonely Thursday years ago

Just back from my younger brother's wedding in Worthing. Bravely, he had the stag do on Friday night, so I took the day off and drove the 200-or so miles down to the south coast to take part in a bit of go-karting and to have a curry. The karting was a "team endurance race", which meant that we were split up into teams, and it was the team who completed the most laps in an hour who were the winners. This is only the second time I've been karting - the first time was at my friend Mik's stag do in Newquay and was on a huge outdoor track. This time it was a smaller track and it was indoors, but it was still pretty good fun. I thought I drove pretty well during my stint, but my lot came last..... an unfortunate black flag put paid to our chances when we had got up to third, and after that we were knackered (no, I wasn't driving at the time).

The curry was also pretty good. It's a bit weird going out to an event like that with a pile of my brother's mates from university, and it's all made a bit weirder by the presence of my dad. Dad was on good form as it happened (he actually ended up staying up for an hour longer than the groom did, and didn't haul himself out of the hotel bar and to bed until 4am. Big up to my dad! I went to bed at 01:30....)

Anyway. At dinner I ended up sitting next to a bloke who I soon recognised as someone that I knew from University Radio Warwick.... I didn't like him much then, but in the circumstances I was somewhat forced to chat with him. About halfway through the meal, he realised that he recognised me, but wasn't quite able to place me - as far as he was concerned at this point, we were just swapping stories and trying to work out who we knew in common. A bit later, the penny suddenly dropped, and he realised EXACTLY who I was. I had to laugh. He knew I was the brother of the groom, he knew my christian name, and he knew I had been involved with the radio station at university at the same time as him... so you can understand why I found it a little amusing that it took fully two hours for everything to click into place. That was pretty much the end of our conversation. I thought he was a dick at university, and no doubt he thought the same of me. I'm sure we've both changed since then, but why pretend we want to get to know each other now? I would have been happy with small talk (and indeed, as I recognised him immediately, that's exactly what I had been doing) but he seemed happy enough to leave it at that. Fair enough.

Wedding was alright. I struggle with organised religion and I couldn't look at the vicar without thinking of Peter Cook as the "impressive clergyman" in The Princess Bride.... 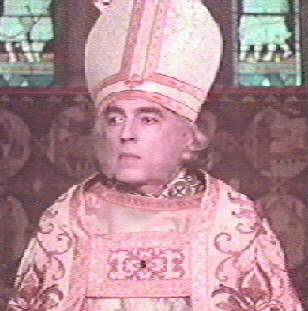 Reception was also alright - took place on the Worthing sea front in a place called "The Dome". It's an old style cinema (still functioning) and the reception took place on the first floor. Meals always confuse me at weddings; I know the main meal is called "the wedding breakfast" for some reason, and I know you eat at weird times, but when I sat down at about 5pm, I was not expecting to be served a cream tea. Hmmm.

Anyway - we had a hot buffet a bit later on, and the rest was the usual combination of some beer, some conversation with family, distant relatives and so on. Naturally, given that my elder brother was married in August, and this was the wedding of my little brother, much of the "amusing" conversation centred around when I was planning to tie the knot with my good lady. I can sort of see where they are coming from, because C. and I have a relationship of longer standing than either of my brothers and their wives (nearly 6 years now) but what really gets on my nerves is the insinuation that somehow I am being difficult about the whole thing, and that I am unfairly keeping C. waiting. This is insulting to both of us, frankly, it's now just getting boring. Having said that, I did enjoy one comment: I thought that the cake was made by the same person who made my elder brother's cake.... as I was confirming this fact with his wife, one of my dad's old schoolfriends piped up with "yes, they got them on three for two...."

The hotel made me laugh. I found one of these in the bathroom: 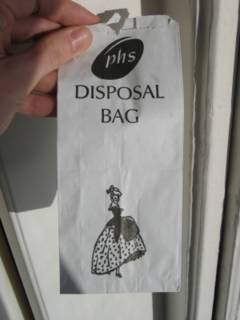 Yes, I know what it's for, but I loved that lovely little drawing of "a lady".... which obviously made me think of Emily Howard, the rubbish transvestite from Little Britain: 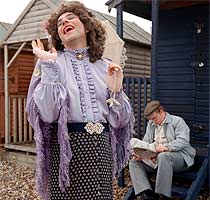 Back to work tomorrow, for a full 5 day week. I have to say, I am not looking forward to this in the least.