too young to fall asleep, too cynical to speak 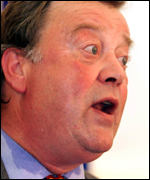 You might remember that in December I brought the website WriteToThem.com to your attention. Basically what this site does is to help you to to discover who your political representatives are (so your Member of Parliament, your Member of the European Parliament and so on...) Once you have found that piece of information out, it enables you to get a bit of background information on them - how they voted etc. - and then lets you send them a fax.

I know who my MP is - he's pretty famous after all - and despite the fact that he is a member of the Conservative party, and that he is on the board at Imperial Tobacco, I quite like the old rogue because:

b) I have seen him swaggering around Trent Bridge during the Test Match wearing a linen suit and a panama, cigar in mouth, glass of red wine in one hand, bottle in the other.

frankly that's the kind of thing in an elected representative that is bound to appeal to me.

Anyway. I decided to put my money where my mouth was, and instead of just moaning about stuff here, I thought I would voice my thoughts to my MP.

Here's what I said:

I am writing to you as my representative in the House of Commons to make you aware my concerns over 3 issues:

1) The recent government proposals to introduce ID Cards. I am alarmed that the government is looking to introduce these measures that I see as an infringement upon my civil liberties. Nowhere have I seen it explained to my satisfaction how this scheme will help to prevent terrorism in this country, and I am appalled by the cost of the proposed scheme. The government may have a comfortable majority in the house of commons, and they may be being supported by your party on this issue, but I wanted to make you aware of my vehement opposition to this proposal.

2) Making Poverty History. We have a great opportunity next year when we have the presidency of the G8 to make a real difference to the poor and hungry across the world. I have been disturbed by the scale of the crisis in the West Darfur region of the Sudan in particular. I personally plan to take a more active role in campaigning and raising money to help other people in 2005, and I would urge you to do

everything that you can to make the government sit up and take notice.

3) The war in Iraq. The government took us to war on a pretext in the face of public opposition, and with no clear objectives beyond the removal of Saddam Hussein. Now it looks as though they have no way out, and soldiers and civilians alike are being killed everyday. Tony Blair seems to believe that the ends have justified the means, but I do not agree. I continue to be opposed to this war, and I am ashamed that the British Government are acting as a figleaf to this US unilateral action.

You are my representative in the House of Commons, and so I thought rather than moan to all and sundry about what has been upsetting me, I thought I would do something constructive and pass my thoughts on to my MP instead. I'm sure that you don't neccessarily support me on these issues, but I think it is important that you know what issues are on my mind, as one of your constituents.

Thanks for listening, and hopefully I'll see you at the Trent Bridge Test Match again this year.... bring on the Aussies!

When I got back home after New Year, I had a little card from the House of Commons through my door telling me that Mr. Clarke had received my letter and would be replying in due course. February rolled around, and I was becoming a little sceptical. Until I got home tonight and found a lovely House of Commons envelope on my doormat with a lovely typed letter inside.

Here's what Ken had to say:


Thank you very much for the e-mail which you sent to me during the Christmas break. I did read your views carefully and agree with you on two of the points that you make.

I do think that it is important that the developed world gives a higher priority to the reduction of absolute poverty in the developing world. To be fair to the present Government, I do think it is taking an active role on this subject and the Prime Minister has said that it will be one of his prorities during our presidency of the G8. I can assure you that I will certainly contribute to the arguments that our Government needs to turn as much of its rhetoric into active measures as possible.

I also agree with you entirely in your comments about the disastrous and unjustifiable decision to take part in the invasion of Iraq.

Probably because I am a former Home Secretary, I must confess that I am in favour of the principle of the introduction of identity cards. I have always thought that a system of national ID cards would be the only effective way to deal with identity fraud and multi-identity claiming for state benefits and the illegal employment of people not entitled to work here. In the modern world, every citizen produces a driving licence or credit card to identify themselves from time to time and the need to do so is not a serious infringement of our civil liberties, in my opinion.

I can, however, reassure you that I think the detail of the legislation on ID cards needs to be worded with care. I will oppose any requirements that citizens should be required to carry an ID card at all times and would resist any penalty for failure to carry the card. I also believe that the information carried on the card should be restricted to whatever is necessary to prove identity and should not be extended to all kinds of other confidential information. I am also extremely dubious about the Government's intention to produce an extremely sophisticated, high technology version of the card, which would run the risk of billions of pounds being spent on an elaborate system which is quite likely to fail in practice.

I was grateful for hearing your views.


So there you have it. I know it's only a relatively small thing, but I was really pleased to have got a letter back. I am not so stupid as to imagine that Ken tapped this out himself on his typewriter, but I do like to imagine that he had some hand in the contents of the reply. Whatever. The thing that encouraged me the most was that the reply has been clearly written as a response to my original email. It's not a standard letter. Somone has taken the trouble to write back properly. He doesn't agree with me on everything, but where we disagree, there is a rational explanation. He's even fair to the Government, for heaven's sake. Good for you Kenneth Clarke. I still won't vote for you, but fair play to you.

My favourite bit? The "disastrous and unjustifiable decision to take part in the invasion of Iraq".

I declare the experiment a success, and I hereby call on YOU to write to your elected representative with the issues that have been bothering YOU.

These people work for you. They are accountable to you. They should care about what you have to say.

I'd love to hear what they have to say.