Watered by the tears I cry.... 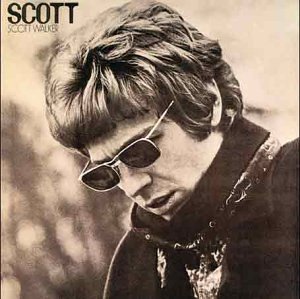 This is the first in an irregular series of appreciations of the obscurer songs residing on my Ipod.

Regular readers will probably know all about my love affair with Scott Walker. In my opinion there has never been a singer that comes near (perhaps Jeff Buckley, but compared to Scott Walker he was a bit showy for my taste). He has the most gorgeous, honeyed bass baritone and an air of tremendous melancholy. Scott Walker could make a trip to the supermarket sound like the cause of great torment and existential anguish (which, now I think about it, sounds about right).

Scott Walker became famous as a member of the Walker Brothers - who I suppose you might say were one of the boy bands of their era. They were enormously successful and sold millions of records worldwide and had hits like "The Sun Ain't Gonna Shine Anymore" and the glorious "Make It Easy On Yourself". They were huge; they had screaming fans and everything. At the height of it all, troubled by the fame and adulation, Scott couldn't take anymore and disappeared. When he re-emerged, it turned out that he had taken solace in a monastery (and apparently he still wears the key around his neck, probably just underneath his hair shirt).

When the Walker Brothers broke up, Scott went solo and released a string of solo albums (Scott, Scott II, Scott III and Scott IV). The albums contained a mix of original compositions and covers (mainly songs by Jacques Brel). This certainly wasn't traditional chart fodder: the songs dealt with loneliness, death, alienation. The success of the Walker Brothers and the continuing popularity of Scott as a sex symbol and his regular appearance on TV (he hosted his own show for a while) led to the happy abberration that intially these albums charted highly - "Scott" was a number one album. In the end people cottoned on that he was by now recording work of a challenging and uncommercial nature, and by the time "Scott IV" was released, it failed to chart at all, which is a shame, as it is comfortably the best of the quartet - featuring as it does "The Seventh Seal", a song about playing chess with the devil....

Walker slowly withdrew from public view, with album releases becoming rarer and rarer. His last album ("Tilt") was released in 1995, and the album before that ("Climate of the Hunter") was released in 1984. I suppose this means that he's about due, and he's apparently in the recording studio now....

This particular song is taken from "Scott", his first solo album after the end of the Walker Brothers in 1967. It is a cover version of a song by Weil / Mann, and I have chosen it because it is the most ridiculously lachrymose song I think I have ever heard. It even starts with a bit of funereal organ, just before the lush orchestration kicks in. Just check out the lyrics and then imagine the song being sung in that majestic baritone....

Angelica, my Angelica
There's so much you never knew
So much I always meant to say
And do, for you, for you
Angelica

Now please excuse me, I have to go and have a good cry.
Posted by swisslet at 09:48