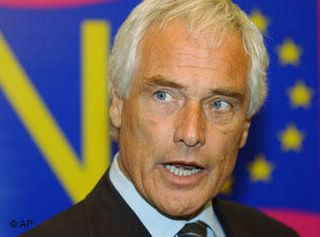 And so we come to one of the guiding lights of European politics (and, I'm proud to report, my MEP), Robert Kilroy-Silk.

I was rather hoping that I might get away without writing about him, but then I saw some of his comments at the launch of the Veritas party manifesto. Apparently, multiculturalism (imposed by "the liberal fascists in London") has failed. The idea of respecting the culture of others is "nonsense" and apparently not all cultures are created equal - some are apparently "reprehensible".

That was it, that was the final straw... I was angry.

How can someone in the public eye say stuff like that and get away with it? Aren't there laws against this sort of thing? I think the thing that annoyed me the most was not so much his casual racism, although clearly that's bad enough, but his glib implication that his own culture is superior to all others.

The thing is though, now I sit down to write about it, I can't find these quotes in a single block anywhere - every single article I have looked at is only quoting Kilroy in bits and pieces, and sticking them all together. If I didn't know better, I'd say that the media were putting it together to make the story look more hysterical than it really is, to fit with the image they like to present of a well-groomed, perma-tanned, former MP, former TV personality, Member of the European Parliament, prospective candidate for Parliament and nasty bigot.

So how did we get here? 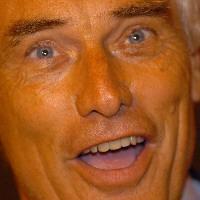 In 1974 Kilroy was working as a university lecturer when he stood as the Labour candidate for Ormskirk in Lancashire and was duly elected to Parliament. He later switched seats to Knowsley North following the 1983 Boundary Review, and looked set for the front benches when in 1986 he decided to move into television to host his own TV show.

The programme ran for 17 years. It was on BBC1 at 9am every week day, and although it was junk tv, it was pretty watcheable. The format was hardly original: Kilroy pranced and preened amongst a studio audience armed with a microphone, and hosted a sometimes lively debate on some fairly minor issue or other. The programme always opened with Kilroy posing a couple of almost rhetorical questions, aimed at getting you thinking about the topic they were about to discuss, and always ended with our host winking into the camera and telling us to "Look after each other".

Genius. He was the king of daytime TV, and I didn't even know he had been an MP, and when I found out, I didn't believe it. 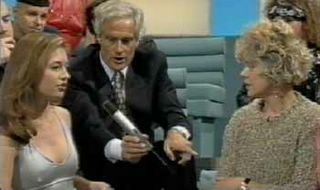 Kilroy keeps his eye on the real issues

I'm sure the signs are there if you have the energy to trawl through the thousands and thousands of hours of archive tapes, but to me he never seemed like much of a controversial figure. He was just the smooth, perma-tanned bloke from the telly who was brutally satirised in 2000 by Chris Morris in "Jam", in a sketch that featured a very good Kilroy lookalike running naked through a shopping centre and ends with him pissing against a shop window, his own image flickering on a bank of TVs behind the glass. The sketch was shocking because of the place that Kilroy had as an icon, as a fixed and crucial part of the TV landscape.

The sketch was called "The Day Kilroy Lost His Mind", and things have moved on so far since then, that it now seems almost prophetic. In some ways I could see that same footage again, played on the news as fact, and I wouldn't be altogether surprised. 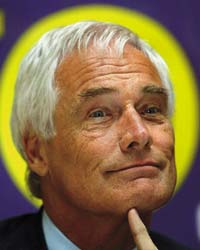 I love the smell of suntan lotion in the morning

Everything changed in January 2004, when Kilroy decided to use his column in The Sunday Express to share with the world his views on Arabs. You can find the article in full here, but here's the highlight:

This really hit the headlines, and the BBC took his show off the air. Surely that would be that and Kilroy would disappear once and for all?

Apparently not. In a somewhat bizarre change of political affiliation, the former Labour MP quickly resurfaced as a member of the UK Independence Party and stood for election to the European Parliament. These elections do not typically attract much attention from the electorate, but the novelty of having a TV celebrity as a candidate stumped up a bit of extra interest, and Kilroy was duly elected. In spite of this success though, it was not a match made in heaven. As you might have expected from a party whose single policy is to take Britain out of the European Union, Kilroy found he had very little in common with the other misfits in UKIP, and frequently seemed embarrassed by the views of his colleagues. To nobody's great surprise, they soon fell out and he left the party to plough a lone furrow as an Independent. His own party, Veritas, followed, and now we have the prospect of Kilroy standing against the Labour defence minister, Geoff Hoon, in the forthcoming election.

I don't imagine that Kilroy will win a seat at Parliament (and actually, I hope he doesn't), but I don't imagine for one minute that a defeat would mean that we will have seen the end of this remarkable, pompous, vain and ridiculous man.

He says the most ridiculous things. He really does. He's also weirdly orange-looking, so I'm not really sure why the media goes to such lengths to make him look stupid. Surely he does that all by himself?

Is it because he used to work in the media, and has now crossed back to politics?

We're always bemoaning the lack of choice at the ballot paper, so should we not be applauding the foundation of a party that is trying to make a break from the traditional politics of Westminster and tries to represent what people really think? We may not agree with his policies, but should we perhaps give him some credit for trying to do something constructive instead of just criticising the status-quo?

On the other hand, he's a preening, perma-tanned, arrogant egotist who is only really in it for himself. He's drunk on his own publicity and doesn't give a flying toss about the people he wants to vote for him.