if you really need me, just reach out and touch me...

I'm going to give you plenty of warning, but if you are of a nervous disposition, I strongly advise that you don't read this post.

....certainly don't look at the pictures.

Anyway. It's been quite a busy weekend.

Lord B. and I (and Lord B's darling daughter) met up with Mark, Ellen & Xander on Friday night at the glamorous location of Pizza Express in Nottingham. I have to admit I was a little bit nervous beforehand; I am generally pretty rubbish at meeting people I don't know and small talk is a skill that I don't seem to possess. As it turned out, I was worrying about nothing and had a really good time. You'll have to ask the others what they thought, but I thought the evening was a real success. Even the sulky waitress was unusually warm in the presence of two such darling bubbas.... I think I saw her smile at one point.

On Saturday I made a few essential purchases.... but I'll tell you about them at the end. It's not too late to bail out now and find a less distressing website to go and look at.

We then headed down to my mum & dad's, where we spent our sunday in the deepest darkest Northamptonshire countryside, walking with some lovely Llamas. 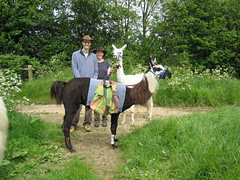 I think my Mum has got tired of asking me what I want for my birthday or for Christmas. Like most guys, I never really know what I want because I usually nip out and buy all the stuff that I really want for myself. As a result, my Mum has started to get all imaginative on me: for my birthday this year, she gave me a voucher for a cheese shop in Covent Garden (I think the idea is that they post me a 'cheese of the month' every month for a year, but I haven't really looked into it properly yet). For Christmas 2004, C. and I were the proud recipients of a voucher to go on a Llama trek. We raised a collective eyebrow, and then dutifully booked a date, put it in the diary and promptly forgot all about it until this weekend.

I tell you what - it was absolutely brilliant. 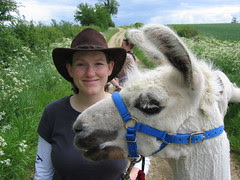 Here's how it works: you roll up at Catanger Llama Trekking at around 10am, have a nice cup of coffee and a biscuit, and then you get introduced to the Llamas you are going to be spending the next few hours with. You then walk about 6 or 7 miles through some lovely English countryside with the Llamas, stopping about halfway for a picnic. It was ace.

Llamas are very friendly, naturally inquisitive and walk at a decent pace -- not too fast, and not too slow. They are also incredibly soft to the touch (the farm actually has some alpacas, who are from the Llama family and are, of course, famous for the softness of their wool). C. had a chap called Spinach, who was extremely even-tempered, and I had a perky little chap called Napper. After a bit of a wrestling match for the first mile, Napper and I got on just fine once we had come to a simple arrangement: he could eat whatever he wanted, whenever he wanted - as long as he didn't break stride. That suited us both I think. 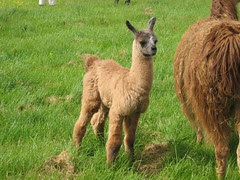 We also met a couple of babies. This little chap was born on Friday. He's pretty big for 2 days old, huh? He also looks like he's just stepped out of a tumble-dryer....

It was a lovely way to spend a Sunday, and a great gift from my mum.

Right. This is your last chance. There is some deeply disturbing content coming up. If you don't want to have nightmares, you had better leave now.

As you may be aware, I am currently in training to take part in the London Triathlon. That's 1500m swim, 40km cycle and 10km run. The swim is in London Docks, and you have to wear a wetsuit. Although I have done sprint triathlons before, they have all had a pool swim. An open water swim is obviously quite different - the water is deeper, everyone starts at the same time and you feel different in the water because the wetsuit makes your legs more buoyant. So that it doesn't come as a nasty surprise to me in London in August, I wanted to get some practice in, and I am doing a sprint triathlon with an open water swim next weekend (750m swim, 20km cycle, 5km run).

So I needed a wetsuit.

Can you see where this is going yet?

I ordered mine a few weeks ago, and it turned up on Saturday morning. I hadn't quite appreciated quite how tight-fitting these things have to be...... 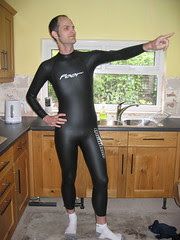 And it's still not too late to run away from your computer screaming....

Without wanting to go into too much detail, the combination of swimming, cycling and running presents quite a lot of opportunity for chafing and bruising. As you'd expect, triathletes have tried to combat this by producing a suit that helps them to compete in all three disciplines without needing to change clothes, whilst also minimising the risk of doing themselves irreversible damage, or significantly reducing their chances of having kids.

It makes sense to have one of these things.

So I bought one. 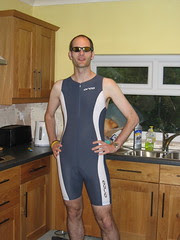