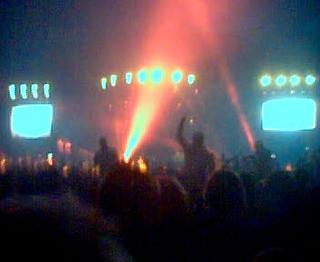 I know you are all thoroughly bored of me going on about them, so I'll try to be brief (dodgy photos courtesy of my phone)

In spite of the pissing rain, Coldplay were magnificent last night. Just when I thought they were going to play EXACTLY the same set at they played at Glastonbury, they made my day by playing the two songs from "X&Y" that they missed out there - 'Talk' and 'What If'. I might also have to change my rule about bands playing the same song twice: because they were filming us for the video of their next single, 'Fix You' got played twice in a row. And it was great both times. 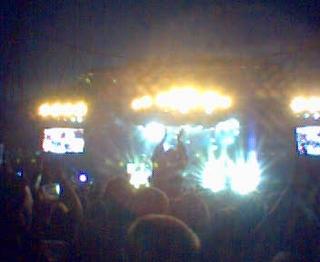 singing out aaah aaaaah yeah etc.
A great band at the peak of their powers (and Elbow were pretty handy too)

I tell you what though. Bolton is a bloody anti-social place to hold a gig on a Monday night. I got home at 3am..... although at least I wasn't driving (thanks Lord B). 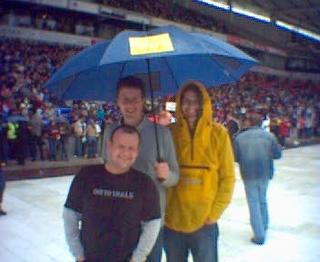 Flash, Lord B & SwissToni enjoy sunny Bolton
I can hardly speak this morning. I may have been singing.
---
We listened to Lord B's iPod on shuffle on the way home, and the first track to come up was "Wind of Change" by the Scorpions, and this was followed pretty quickly by some Roxette and then "5, 6, 7, 8" by Steps. Hmmm. Great start out of 4000 tracks, and in some ways entirely representative of his taste in music.

This got me thinking.... what do the first 10 tracks to come up on shuffle on my iPod say about me?
On balance, I'm happy with that.
Calling all you iPod owners out there.... take the SwissToni Shuffle Challenge.