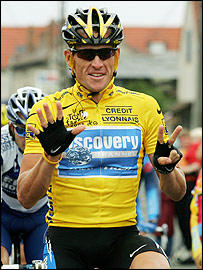 Today saw the end of the 92nd Tour de France, and I just want to take a minute to salute Lance Armstrong, who has completed an unprecedented seventh victory. The Tour has got to be one of the toughest events in world sport: the race is 3,608km long and the route incorporates stages that take the riders over the Alps and the Pyrenees. Stage 10 of the race actually finished at the aerodrome in Courchevel. I went skiing in Courchevel this April, and the idea of cycling up that mountain just boggles my mind.

Armstrong's winning time was 86 hours 15 minutes & 2 seconds, and his average speed was 41.6km/h. To put that into perspective, I have a little speedometer attached to my road bike, and the fastest I have ever travelled is about 50km/h going down a pretty steep hill. My average speed is usually somewhere around 26km/h. I don't need to point out that I don't have any serious mountains on my usual cycle routes, do I?

As if this wasn't enough, let's not forget that Armstrong has achieved all of this after recovering from testicular cancer.

Truly one of the great sportsmen of any era.

...and he provided us with one of the great cinema cameos of all time, in Dodgeball...