but our land does not breathe in 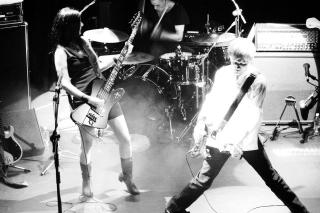 JJ72 at the Nottingham Rescue Rooms.

JJ72's debut album came out in 2000, but somehow it feels like longer ago than that. The band were just kids, and they sounded a bit like Placebo singing lyrics written by the Manic Street Preachers. I bought the album, listened to it for a bit, and then pretty much haven't given them a thought since. Lord B asked me if I would come along to watch them at the Rescue Rooms (ticket price £10) and as (against his better judgement) he's coming along with me to the same venue to see The Editors in a couple of week's time, I agreed. I won't say I was exactly looking forward to it, but I'm always saying I should go to watch more live music, and this is a nice intimate venue to go and watch it in.

We walked into the venue a little late, to be confronted by the bare chested howling of a Northern Irish man from a band rejoycing in the name Red Organ Serpent Sound (what's that all about? is the singer called 'Ross' or what?). I suppose the band themselves were okay, but the singer was rubbish. Apart from his semi-naked preening, he howled like a heavy metal banshee, only slightly out of key. I cocked an eyebrow and headed to the bar.

JJ72 came on, and it became apparent that although original bassist, Hilary Woods, had left the band, they had trawled the world to come up with someone who looked pretty much exactly like her (they found her in Canada, apparently). Mark Greaney meanwhile still looks like he is about 14 and has absolutely no need for a shaving mirror. But do you know what? They still sound pretty good. The voice is unmistakeable, and the material sounded okay. I won't be rushing out to buy the new album, but I will be digging out the first one and giving that a listen tomorrow. In 'Oxygen' they have at least one stone-cold classic that hasn't been dimmed by time, and 'Snow' never fails to make me smile:

Naturally, this got us thinking about other songs with a metereological title:

Riders on the Storm
Sunshine on a Rainy Day
Rain
Thunder Road
Weather with You
Electrical Storm
Smokestack Lightning
and so on.... (hours of fun, feel free to play along)

This at least served to distract me from the twat at the gig (c. Damo) who this time around was some woman who insisted on spending the whole concert, which she appeared to enjoy, bellowing at her friend standing next to her... all the way though JJ72s set. Gah!

Anyway. A decent enough way to spend the evening. I think The Editors are up next, and then a long run of gigs up to Christmas (off the top of my head: KT Tunstall, Bloc Party, Franz Ferdinand, The Bravery, The Bluetones). Nice.
Posted by swisslet at 23:34