It's gonna be a glorious day 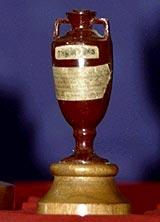 Indulge me for a moment will you? You may remember me banging on about it just before the first match in the series, and again after the Trent Bridge test and the Spanish Cardinal incident.... but let me hold forth on the subject one last time. Something has just happened which means an enormous amount to me: England have regained the Ashes.

"In affectionate remembrance of English cricket which died at The Oval, 29th August, 1882. Deeply lamented by a large circle of sorrowing friends and acquaintances, RIP. NB The body will be cremated and the Ashes taken to Australia."

Thus reads the inscription on one of the oldest but least impressive trophies in sport (it's about 5 inches high). A tiny little wooden urn that contains the ashes of the bales burned after that famous game when Australia beat England at their own game on English soil.

I've pretty much always been interested in cricket, but the first series that I ever really watched ball-by-ball over the course of the summer was in 1989. England had held the Ashes for a decade, and looked the stronger side again. It didn't quite work out like that though: the Aussies scored 601/7 (dec) in the first innings of the summer and never looked back. England were spanked, and it's been more of the same ever since then.

Look at this shameful roll-call of series results:

More often than not, when England did win a game, it was only when the outcome of the series had already been decided (the only exception being Edgbaston in 1997).

Until today, not a single player in the English side had tasted series victory against the Australians, and not a single player in the Australian side had tasted series defeat to the English. A whole generation of English players has come and gone since England last won. Michael Atherton made his test debut during the series in 1989 and retired after the final Test against the Australians in 2001. In between he played in 115 test matches and never once got close to winning a series against the Aussies... nowhere near. By way of contrast, the last Australian player to lose a series to England was Steve Waugh - who retired from cricket in 2004, but played in that 1987/8 series. 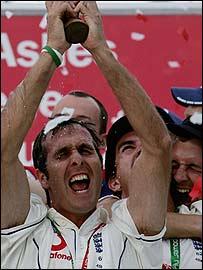 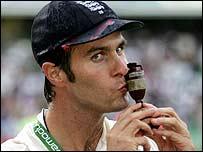 But all of that finally ended today when England comfortably held on for a draw at The Oval and won the series 2-1, thus regaining the Ashes - and what's more, they bloody deserved it. England have played some sensational cricket this summer, and have had the better of the number one side in the world. It says a lot for the Austalians that they made it such a close series: at least three of the matches could easily have gone their way. In Shane Warne (623 Test wickets and counting) and Glenn McGrath (518 Test wickets and counting) they have two of the greatest bowlers ever to play the game, and my word they didn't give in easily. It was one of the best series ever, and the country was gripped - even when the Premiership season started in the middle of the third test of the summer.

It's a great day, and I make no apologies for enjoying the moment.

(by the way, the bloke below was Richie Benaud - one of the game's greatest commentators, who was today behind the microphone for his last Test Match in England)
Posted by swisslet at 18:21