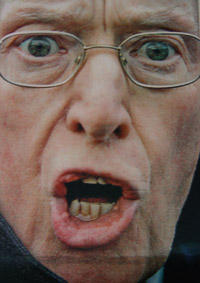 Today saw a return to something I had rather assumed we had seen the back of. For the first time in years, there were riots in Belfast today. This was apparently triggered when the police refused to allow the Loyalist Orange Order from parading into a Nationalist area. In the wake of this, petrol bombers attacked police and soldiers in several parts of the city, and there were reports of automatic gunfire.

Several things about this make me angry:

1) The refusal of the leaders of the Orange Order to accept the possibility that it might actually have been sensible for the police (after a review) to insist that they change the route. How would it not be inflammatory for these bowler-hatted buffoons to march with their drums and their pipes through a mainly nationalist area? Is that so hard to understand?

3) The Reverend Dr. Ian Paisley. This pompous buffoon is a festering sore on the peace process. Today he chose to blame the Parades Commission for its ruling on the route, rather than deigning to condemn the violence - the unspoken assumption being that the one deserves the other. Then again, what do you expect from someone who bought their title to be called "Reverend" from a correspondence course, has an honorary doctorate from the Theological Seminary in Rockville and uses both to bolster his 'moral authority' as a gloriously one-eyed bigot.

Apologies for sounding off on this, but as if the news wasn't depressing enough already, the scenes I saw on my television this evening made me feel very sad indeed.

I was also irritated by all the talk of rising petrol prices and the need to increase oil production. Apparently we need to make sure that there is enough fuel to meet global demand.

Er.... is it just me, or is this something of a short-term solution? Unless I am very much mistaken, oil is a finite resource, and one day increasing production is just not going to be possible.

It's great to know that we're good and ready for the day that the oil wells finally run dry.
Posted by swisslet at 00:11