I'm a stranger to myself 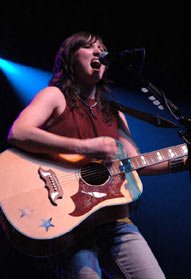 Before I start this, I should probably tell you that I'm not a massive fan of KT Tunstall. I don't dislike her or anything, and I have the album on my iPod, but I've never really been massively grabbed by her music. Still, she was pretty good at Glastonbury (although I had been drinking cider) and I had agreed to accompany Lord B to this gig in exchange for his attendance at The Editors gig a few weeks ago.

As usual, we turned up at about 9pm to find the lobby area of Rock City eerily empty. Usually this is bursting with people checking out the merchandise, and just generally hanging around. This evening, in spite of the gig being a sell-out, there hardly seemed to be anyone around, except for a very polite family picking up their tickets from the box office (who still have Embrace tickets left, by the way - they're playing a warm-up for their arena tour here in a couple of weeks). I suspect that this is the KT Tunstall audience. Sure enough, the main room was absolutely packed with people who would clearly have preferred to be in a venue with seats. Still. I shoved my way through these immobile pillocks to the bar and settled in to watch the show from the fringes (being tall enough to see).

KT came on wearing a t-shirt saying "Witch" (it's Halloween, you see....) and proceeded to say something I didn't catch. This became something of a theme. Our KT is from Fife (or somewhere like that), and although she doesn't have much of a Scottish accent, she clearly has enough to of one for me to completely fail to understand what she was saying apart from the odd word. It was a bit like watching a tiny, Scottish Rowley Birkin.

What can I say? She was alright. She paced her set badly, and left too many quiet songs for the end... but songs like "Suddenly I See", "Black Horse and the Cherry Tree" and "The Other Side of the World" are not bad at all, and well worth seeing her perform. Ed Harcourt made a fleeting appearance at one point, but to be honest, as he was all dressed up in a skeleton costume, complete with mask, and didn't say a word throughout, it might as well have been Mr.Ed for all the difference it made. I think the main problem is that I just couldn't escape from the impression that the music was probably best heard from a nice warm bath, surrounded by scented candles, and not in Rock City. Rock City is where I go to see bands with loads of loud guitars, and leave with my ears bleeding. It's not somewhere I go to watch people smooching to gentle acoustic music played by a tiny Scottish pixie. The audience was fascinating: lots of couples, of course, but I also particularly enjoyed the bloke who looked like he had walked in expecting to see Smokey. Takes all sorts, I suppose.

Sorry KT. I'm sure you deserve a better review. Perhaps Lord B will oblige.

I might go and see Dr. Carl Kennedy from Neighbours next. He's playing at the Walkabout in a couple of weeks. Who could resist that?

Or it might be The Bluetones. I can't remember.
Posted by swisslet at 23:22