inside your head were things I never thought about... 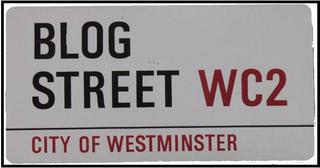 It's about time we took a little wander down the street. I know that the nights have been drawing in a little bit recently, and it's been a bit cold, damp and autumnal, but it's been a while since our last stroll. I don't think we should let a little thing like the British weather stop us from being nosey and rummaging around in our neighbours' bins, eh? Besides, I think a couple of new people have moved in recently, and we should go around and introduce ourselves properly, before they think it's acceptable to leave their wheelie bin out in the street all week. Bless them. If we don't tell them, they'll never know any better.

- > a big hello then to clm from to do #121: insert clever title here. She's recently discovered that she is both Mother Theresa & Easy Rider, but if you can get past that shock news, you'll discover an avid gig-goer (most recently Iron & Wine, who I haven't heard of, but in the last few weeks has also been to see BRMC, The Frames, Oasis and Kasabian as well as getting addicted to the Hard Fi album. A girl after my own heart. Well, apart from the Oasis bit anyway.

-> also moving into our street is Charlotte from Charlotte's Web. Charlotte is a part-time tranny taking her first steps into a wider world and is currently getting ready for her public debut. I'm not exactly sure how I ended up reading this one, but as often happens, now I'm hooked. I'm sure she'd appreciate it if you pop round with a cup of sugar or something.

-> hello as well to bytheseashore. A compelling mix of travelogue (a recent trip to New York - see here, here and here for starters), politics (observations on the Conservative Party leadership elections) and martrydom (supporting Nottingham Forest). There's usually music on there as well, but that's more than enough links to be getting along with, eh?

-> Greetings also to Professor Hyde from The Annals of Mr.Hyde. I've been reading this for a lttle while, but she's been seeing Narc again. Need I say more?

-> I'd also like to take this opportunity to formally introduce you all to Yoko from Yoko Spungeon's Diary Dungeon. Yoko is in the wonderful habit of sending me books to read - usually Paul Austers - and that should be reason enough to love her to bits, no?

There are a couple of familiar faces in new homes too:

-> Last week's Guest Editor, Leah, is back from her travels, and as well as resuming her residency with Jenni over at Democratic Goddesses of America, she has also moved into a place of her own just down the road. When she's not busy publishing sneak previews of another blog's exclusive content (ahem!), she can be found chattering away cheerfully on a wide variety of subjects (job interviews & the Green Bay Packers mainly....)

-> and, of course, foxy-poos has moved out of digs and into a particularly des res - the gated mansion set in grounds at the end of the road (well, the gates are at the end of the road, I think the mansion may be set some way back in the grounds). Foxy was good enough to invite us to the housewarming though, so I mustn't grumble. I hope there's a party on Bonfire Night as well, although I suspect Foxy will be otherwise engaged underneath the House of Commons with Red and a whole lot of gunpowder.

What else is going on though, eh? Lots of other people getting the removal vans in too, but the looks of it.

-> Mark's planning a move at the moment as well - to a lovely looking house with its very own blue plaque, which is kind of cool, don't you think?

-> Judging by the fact that his front door has been left swinging and all the furniture has gone, it looks as though Tom might have moved out in a hurry.... I hope it's only temporary mate.

-> Lord B looked like he might be on the move as well at one point last week. The "For Sale" board went up and the windows were all boarded up. It looks as though he's had a change of heart though, so hurray for that. What would our street parties be like without him manning the BBQ, eh?

phew! Anything else going on then?

-> Spin is busy running a competition to get her readers to tell her what character from the movies they see her as, and what character they see themselves as. I decided that Spin is a heady mix of Galadriel, The Oracle & Amelie, and that I'm an unholy combination of George from Seinfeld and Larry David from Curb Your Enthusiasm (who are basically the same character anyway, right?). Other suggestions for Spin include Susan Sarandon's character from 'The Hunger', Patricia Arquette in 'True Romance' and Janeane Garofalo's character from 'The Truth About Cats and Dogs'. If you get over there quick, I think you might still have time to get an entry in....

-> Ben from SilentWordsSpeakLoudest treats us to a long review of Virginia Woolf's 'Congenial Spirits: Selected Letters'. Arab Strap and 'Nighty Night' can wait if you've got more of this up your sleeve mate!

-> Bee has been baking again, and has shared (by popular demand) the recipe for her White Chocolate Creams. Capt.Damo has presumably been rejoicing the fact that the Arctic Monkeys have made it to number one this week. Both are freshly back from a weekend chez The NumNum, so I hope they've been helping to peg back the ivy.

-> Flash has been to see The Kaiser Chiefs and Maximo Park, but doesn't look like he's been home to tell us all about it yet.... [checks....] Oh actually, yes he is. Sounds like he had fun. Maximo Park - my album of the year so far, I reckon....

It's bloody hard work this, you know. I'm going to stagger back to my house for a much needed cup of tea, I think....

You're all welcome to join me, anytime.