He says 'I'm sorry but I'm out of milk and coffee'

Right. Just got time to squeek this post in before I have to dash off for a train... so I'll have to keep this fairly short. Look, what is there to say? We've made it to Friday, and I've made it to 25,096 words (By the way, I feel I should apologise again for the fact that this bloody book thing is dominating my life at the moment. I'm trying not to bore you with it too much, but it's never very far away from my thoughts. In my increasingly desperate search for other topics, I seem to have inflicted a rather crap joke and a conversation about toilets upon you, for which I am truly very sorry. Mind you, if you want to hear more about the book or want to read any more extracts, you only have to say....)

It's Friday. Hurray! It's time to slip into something more comfortable and make our weekly tripi to the temple to pay our respects to the Earworm God. Leading our worship this week is a man with mp3s literally dripping off his blog, and as he is currently featuring a song by Lionel Richie, he must really know his stuff, eh? ('oh what a feeling....')

Oh yes. Ladies & Gentleworms, without further ado, it is my very great pleasure to present for your earworming pleasure.....

Greetings ST, fellow bloggers, foreign dignitaries, my beloved Pastafarians, and assorted critters: I am honoured and privileged to behold the power of sharing the worms within my ears with the rest of the class, except for that one guy…

Anyway, here goes the list of the songs that have been regularly improving and/or destroying my listening pleasure:

Hey Jude by the Beatles
This one was brought upon me by an odd source. A group of friends and I went out to a bar on karaoke night. That is when HE took the stage. He stood around 6 foot 5 inches, 400 pounds. (1.95 meters, 181 kilos if my math still works). He had a long beard, and a yamaka. This man went on to perform an amazing rendition of Hey Jude, with the full-blown “hey Judy, Judy, Judy!!!” ending. He is my American Idol!!!

Virginia Moon by the Foo Fighters
This is the lazy Sunday afternoon song. Acoustic guitar, Dave Grohl singing… The man is a genius. He can rock like few others, being mainstream yet providing enough noise, then pull out an acoustic guitar and accomplish a song like this.

Doesn’t Remind Me by Audioslave
This is the case of the earworm that spawned. Ever since the new Audioslave CD came out, I have had in one form or another, music with Chris Cornell on vocals. It’s been nonstop Audioslave, Soundgarden, Temple of the Dog, or solo work. His voice has amazed me for years. This is the song that started the ball rolling on this earworm, and it is still getting regular play.

Land of Confusion covered by Disturbed
I have a sick fascination with covers. (I won’t go into full detail, as it would take a 20-page report with an annotated bibliography.) This is the newest, a metal band singing some Phil Collins. I didn’t grasp the meaning back when Phil did it, but now the political meaning grips me a bit further.

Feels Like Rain by Buddy Guy
While having iTunes in party shuffle, this song came on. It spurred a blues listening spree for me. This song has stayed beyond that spree.

Ballad of Bodacious by Primus
I don’t dance. This song makes me consider it. Les Claypool, another musical deity, somehow manages to be a hippy, a hillbilly, and able to write some of the funkiest bass lines to ever be produced. Amazing that someone can write a song with that bass groove, and lyrically it’s about a bull named bodacious and the rodeo.

Fall Into Sleep by Mudvayne
This song is a bit more representative of most of my listening, but I’ve been in one of those “need to listen to something different” moments as of late. This song though, has re-found its way back for me. Songs like this are the basis of my nu-hippy lifestyle. Angsty, politically motivated, metal
songs… Good lyrics, catchy chorus… Can it get any better than that?

Entwined by Lacuna Coil
Italian Goth Metal. That’s how I describe this one to my friends (who won’t venture outside of top 40 radio.) Then when they hear it they get shocked, since the band is very melodic. Cristina Scabbia may possibly be my favorite female rock vocalist. This particular song, although good, has become the bad earworm, as I tend to just get the repetitive chorus stuck in my head. Nothing worse than one sentence of a songs lyrics repeating “over, and over, and over again…” actually… That’s the part of the lyrics that plagues me.

One More Try by George Michael
So, I’m at work, and this song comes on. George Michael’s music is just way too catchy. For some reason, all I have to do is hear one song and it will stick with me for weeks. Much better his solo ballads than his work with WHAM! If I ever get “wake me up before you go, go” stuck in my head again I cannot be held responsible for my actions.

Da Ya Think I’m Sexy? Covered by the Revolting Cocks
Lately the weather out here has been cold, misty, and rainy. Which is pretty much a line to the song. So… every time I walk out into weather like that, this one gets stuck in my head. At least it’s the oddly amusing cover, and not the original Rod Stewart song.

Thanks Michael – and let me be the first to congratulate you on the inclusion of the god-like genius of Les Claypool in the list. I must dig out “Frizzle Fry” or “Sailing the Seas of Cheese”…. No one plays bass quite like our Les. I always find these lists fascinating, especially when someone removed from the parochial little music scene we have in the UK does them. I’ve never heard of people like Mudvayne or Lacuna Coil or Disturbed… although who the hell are The Beatles? Any good?

Next week’s Guest Editor is Hyde from the Annals of Mr. Hyde. I’m hoping for great things: as well as being a prolific and talented blogger, Hyde takes proper singing lessons, and has been known to step up to the karaoke microphone from time to time… I wonder if her big set piece number is something like “More Than This” (in a Lost in Translation tribute kind of way), or perhaps she’s more of an “I Will Survive” kind of girl? Or maybe “Bat Out Of Hell”?? I feel we must be told…

Anyways. I’m just off down to London to escort my lovely partner to a charity ball at the Grosvenor Hotel. Oh the glamour etc.

Until next week then.

It Armistice Day today, so just a quick thought before I go: let's hope that the next year brings us fewer causes for additional Remembrance than this year. 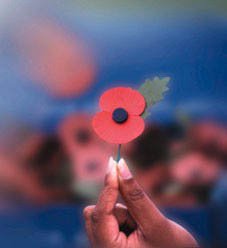