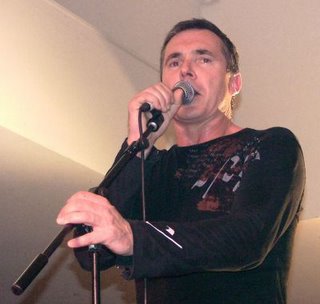 Right, quick catch-up for anyone not au-fait with who this guy is: for the last 10 years, Alan Fletcher has played the part of Dr.Karl Kennedy in the Australian soap opera 'Neighbours'. This programme is enduringly popular in the UK with housewives and with students because it is screened as part of daytime TV -- when I was a student it was on just after the news and just before Colombo, the Rockford Files or Quincy. After Harold Bishop, Dr.Karl was one of the best things on it; grumpy, but with a heart of gold.

Now, I haven't watched Neighbours in a long time, but when I switched it on a few months ago when I was working from home, I was shocked to discover that Dr.Karl had separated from his wife Susan! They were a great couple, and this came as a terrible blow to me, one from which I am only just beginning to recover.

Anyway, it turns out that Fletch has a band, and that he was doing a tour. As part of Lord B's birthday celebrations, I attended his gig at the Walkabout pub in Nottingham this evening. I'd love to say I was dragged kicking and screaming, but sadly that just wouldn't be true, and I was kind of curious about what the show would be like. The place was, of course, heaving with students. There were lots of a banners ("Dr.Karl I want your babies", that kind of thing...), and a group of girls were dressed up as nurses. In fact, now that I come to think about it, there were rather a lot of women there full stop. I think our Fletch is a bit of a dark horse with the ladies....

Kirsty Crawford was the support, and apparently she was in Pop Idol, but I'm blisfully ignorant of these things, so I'll leave a description of her rubbish karaoke set to Lord B. Fletch kept us waiting for bloody ages, during which time the DJ tried to drive me mad by telling us over and over again that we could meet Fletch at the end of the show if we went up to the DJ booth and bought a copy of Waiting Room's album... Fletch emerged with the band at a little after 10pm, narrowly saving the DJ from a bloody death, but all irritations were soon forgotten when the set began.

I think the setlist says it all:

It was great! Frankly, I don't think you've really lived until you've heard a character from Neighbours playing 'Song 2'....

I also learnt a couple of key Neighbours plot points:

1) Susan has met a new man (boo!). The new man is terminally ill (hurray!). Karl is his doctor, so knows this. Susan doesn't know, and Karl can't tell her because of the hippocratic oath. oooh!

2) Susan and Karl are going to get back together. Hurray!

If I didn't have a job and a life, I'd maybe start watching again.