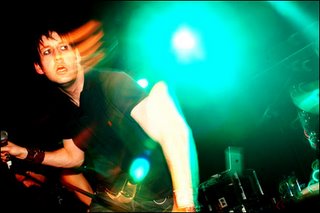 Let's get the support out of the way first. It was The Paddingtons. They're apparently being touted by the music press as the latest best thing since sliced bread, and they got a reasonable amount of crowd recognition. I thought they were piss poor punk imitators. They were clearly trying to sound like a cross between the Clash and the Libertines, but their singer couldn't carry a tune in a bucket, and they weren't anywhere near being more than the sum of their influences.

The Bravery finally shambled onstage at about 10:05pm to a rapturous reception from a crowd that looked to be made up mainly of students with mullets. Against all the odds, they were pretty good. They're a funny band really, consisting of about 45% eighties synth pop, 25% Bon Jovi's drumming and 30% heartfelt, bombastic but moany vocals. At the start of the year, the force appeared to be well and truly with them: word was out, and they sold out a gig at the Rescue Rooms in February before they had officially released any material in the UK. I don't generally receive music recommendations at work, but no fewer than two separate people in the office directed me to the demos on their website.... They released two cracking singles in "An Honest Mistake" and "Unconditional", and their debut album followed in March, reaching number 5 in the UK album chart.

As the year went on though, the momentum appeared to be slipping away. Their moment looked to be passing. When the album was first released, I thought that it was more consistent throughout than "Hot Fuss" by the Killers, a band they are sometimes compared to. When I put the two albums on the other day though, it was the Killers who were miles in front, and The Bravery album sounded stale to me, too derivative. I therefore approached this evening's gig with some caution.

I shouldn't have worried. I was stood right on the edge of the crowd, up in the bar, but even from there I was impressed by the reception that the band got when they came on. The crowd were really, really up for it. In fact, I would go as far as to say that I have never seen a band get such a good reception throughout their set at Rock City as The Bravery did tonight. They didn't play the best set that I have ever seen, but they were really pretty good. Sam Endicott has an excellent live singing voice, and he really put himself about... at one point throwing himself into the crowd, to shrieks of delight.

The band played for about 40 minutes in all, playing all of their album, a couple of new songs (which both sounded okay), a b-side and a cover I didn't recognise. I wasn't expecting to be able to say this, but I thought they were good, and I will be digging out the album to have another listen to in the car tomorrow morning - you can't say fairer than that.

(it's Dr Karl Kennedy next Sunday... a tough act for Franz Ferdinand to follow when I go to see them the following night....)

I've got about 10 handwriting samples now.... if you still want to play, I reckon you've got another couple of days before I pack them up and ship them off the The NumNum for some analysis before sticking them up here for you to have a guess at who they belong to.