and I won't look down 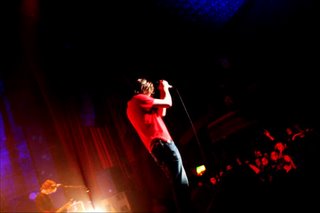 First things first: this was a very generous Christmas gift to me from Lord B, who went out of his way to get hold of a pair of tickets for this long sold-out gig. Many, many thank yous. There is very little that I enjoy more than getting out of the house to get to a concert.

Right. Now that's out of the way...Embrace.

Embrace are a funny band. They had a few hits back in the latter part of the 1990s, and for a little while looked like they might really make it big. They never quite did though, and by the time the twenty-first century came around, they were pretty much finished. Then Chris Martin gave them a song - "Gravity" - which reached number 7 in the UK singles chart, and suddenly they were back, and their 2004 album "Out Of Nothing" actually topped the UK album chart. I like "Out Of Nothing", and even before I heard it was a Coldplay song, I thought that "Gravity" was the best thing that they had ever recorded by a substantial distance.

So now this.... a warm up gig before the band kick off their arena tour on Thursday. The crowd was certainly up for it, but I was a little apprehensive. In anticipation of the gig, I had listened to "Fireworks", the singles collection, and although they have some good songs ("All You Good Good People", "Come Back To What You Know", "My Weakness Is None Of Your Business", "Save Me", "Hooligan"...) it's abundantly clear that Danny MacNamara couldn't carry a tune in a bucket. He's famously rubbish live too.

I'm afraid my review is going to be pretty basic: the band came on, they played their stuff.... and they were alright. Danny does tend to honk like a sealion, but on lots of their songs, it doesn't really matter. They played a whole pile of new stuff too, which sounded in places really frighteningly like "X&Y" era Coldplay (singing apart)... but seemed otherwise okay. I thought they paced their set badly, with lots of their best known songs right at the beginning, a long lull with some of the newer songs, and then sort of picking back up a bit by the end. To be fair though, they did play "I Believe In Father Christmas" by Greg Lake, which was a bit of a bonus.

The problem for me with Embrace is that they are basically striving all of the time to be anthemic. Sometimes they succeed ("All You Good Good People"), but most of the time they fall short. That's no disgrace, but they don't really seem to have anything much to fall back upon. They're not a band with a great intellectual depth and profound lyrics, and so I often found my attention wandering during a song, and I end up focusing on Danny and marvelling that he really can't sing.

Maybe I'm being too harsh.

The other thing about them (and I'm going to sound like a snob here) is that their audience tends to err on the side of the chav... many of them look like Oasis fans, and whilst it is mildly amusing watching them try to carry out the Liam Gallagher swagger without spilling their drink, it is less so when they are pouring their lager over you or trying to turn "Gravity" into some chimp-like "Don't Look Back In Anger" singalong.

(but they weren't *all* that bad, and it is always nice to get out to a gig on a schoolnight. Thanks Lordy B!)
Posted by swisslet at 23:29