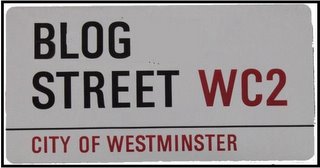 It's been a little quiet in the neighbourhood, so I think it's time we had a seasonal wander down our street to see what everyone's up to. I'll try and resist the temptation to give you all a blast of "Good King Wenceslas" or some other festive atrocity, but if you want to give me a mincepie and a glass of brandy as I pass you by, then that would be most welcome on this cold evening.....

-> We start our ramble with Ka over at The Grey City Manifesto.... It appears that the ever fragrant one is contemplating a move across the street to Mexico. This has been the big dilemma of the last few months, but it looks as though the results of the Canadian jury are now in.... we've all been on tenterhooks for this one.... And the answer? "So the decision is not to decide. Yet." Ooooh you tease!

-> Someone who knows all about moves is Charlie from Late Night Radio. It's been a couple of months now since our hero chased his dream away from friends and family and down to the big city. It's a big life change, so you'd think that Charlie has been contemplating life, loneliness and the meaning of the universe, and in a way he has.... "Snapple fact #123: Beavers were once the size of bears. Holy shit!". Mind you, any office that has Seinfeld Season 4 in their Secret Santa has got to be worth something, right?

-> Another denizen who has been on the move recently is Mark from Fear & Loafing In England. Now nicely settled in, he has been showing his in-laws around London. Dude - your father-in-law needs a bigger jacket.... You can't argue with snakes on planes though.

-> Over at The Big Blog, Adem has the look of the cat that got the cream about him... and with good reason too. Eighteen years old, apparently....

-> Life has been good over at Le Flash's place recently: "Right now I feel like I am living a charmed life. Everything is just going so very swimmingly. I can't help but feel that something catastrophic must be round the corner because, right now, I am having far more pleasure than I deserve." Not true mate, not true. In my view, it couldn't happen to a nicer fella.... and in case you are thinking of breaking into Flash's place on the street whilst our man is away, he's entrusted the keys to Spins and she's acting as caretaker... to be honest I think it could do with a bit of a dust... You're a champion Spin - keep smiling.

-> If you're looking for somewhere to ransack, it looks as though Red is away too, and I'm not sure there's a caretaker. Best be careful though, the place is probably under surveillance, bugged up to high heaven, and is likely to have already been turned over by some government stooge already, so you won't find much.

-> When he's not busy dating 22 year old doctors (more fool her, by the way), Bargs has been keeping himself busy and the rest of us entertained with a question and answer session. We've already learnt that he owns three Steps albums, would have quite liked it if England had won the World Cup in 1990 and likes the Pet Shop Boys. This much we could have worked out. He's still open for more questions, so off you go and ask him something difficult, for heaven's sake (although, for the record, I'm not sure that England winning the World Cup in 2006 is something you can make a New Year's Resolution about....)

-> beautiful, warm, generous-spirited Aravis has been spending every waking hour playing Myst IV... well, except the time she spends wondering what kind of person puts the term "man perp" into a search engine. Why do they end up on your blog again?

-> Leah has been waxing lyrical about some chap called Brett Favre .. but, y'know, it's not proper football is it?

-> At the manor house at the end of the road, Foxy is busy getting ready for a non-commercial, non-denominational festive period... a place where, if I'm reading this correctly, Turkey is bad?

-> Michael has nominated all-round good egg Kevin Federline as his person of the year 2005: "He made the pop princess into in the kitchen, barefoot, and pregnant." Good enough reason for me.

-> cheeky Alecya has revealed herself to the world as a hottie, but has just as quickly got bashful and if you missed it, you're too late now....

-> Yoko has been taking rides from nude cabbies - probably best if you don't ask. Nude bookcrossers though? Hmmm. Depends on the bookcrosser, eh Yoko?

Ah. I love my neighbours.

Have a good Christmas y'all.