the most wonderful day of the year

I'm going to blog my day. OK, so I've pretty much stolen this idea wholesale from foxy.... but the way my day started, it seemed the only sensible thing to do.

Sitting comfortably? Good, then I shall begin:

Awake to the sound of throwing up. It turns out that three of the five occupants of the house are suffering from eating some possibly dodgy pork rillette at dinner last night. The noise proves impossible to sleep through, so I get up, make a cup of tea and read some appalling doggerel about how wonderful Bob Dylan is in the latest edition of Word Magazine. Clearly the man had some talent at some point, but it increasingly looks as though all that remains is the ability to pull the wool over the eyes of middle-aged journalists who should know better. Why do I buy this mag again? Make a mental note not to bother next month.

The house is finally silent, but I'm fully awake now. Lord B. is up now and seems to be okay. Make another cup of tea and contemplate going for a run.

Run the face recognition software that Mark & Foxy have been talking about. It turns out that I am:

Er. If you say so. (C. comes out as Julia Roberts, Shania Twain, Juliette Binoche, Mia Farrow, Penelope Cruz, Audrey Hepburn and Jane Fonda. I reckon she'll settle for that.) 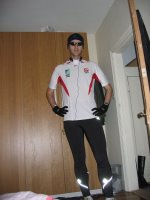 It's nice and crisp outside at the moment, so my run along the river Trent was quite pleasant. According to my heart-rate monitor, that was 36 minutes during which I burned 543 calories. Well that covers off...what... a couple of chocolates?

The house is still very quiet - Lord B has nipped home to feed his cats - and it's basically only C's dad and me who are up and about.

This is a bit weird. 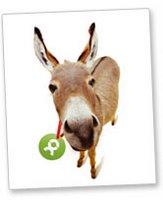 On your behalf, I have donated a donkey.

"A donkey can carry large loads over long distances, which really takes the burden off fetching and carrying supplies to and from market. Or harness this hardy fellow up to pumping equipment and it can make irrigating crops easier, plus there’s the bonus of free fertiliser."

So. There you go. Somewhere in the world is a donkey called SwissToni, donated in your name. Happy Christmas.

I've just had a Stoke breakfast: eggs, bacon, cheese, tomato and brown sauce all wrapped up in a big pancake like oatcake thing. Very tasty. I can feel my arteries hardening as I write.

For some reason I'm listening to Radio One. This has to stop.

After speaking to my dad, I've just mixed up some "Jungle Juice" for our patients: a couple of litres of water, a drop of lemon cordial and a dash of salt. It's important to take in a lot of fluid, and apparently the salt will make it more easily accepted by the body and will provide vital electrolytes. I say apparently, as I gave some to C. and she more or less immediately made a dash for the toilet.

I've turned the radio off at least, and now I'm listening to "Music To Watch Girls By". If I hear Slade again today, I may have to kill someone. 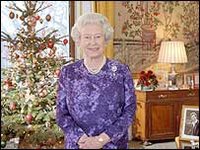 Ah. It's that great British tradition now: the Queen's Speech. A time when the whole nation, bloated on turkey, sprouts and pudding, gathers around their televisions and watch the monarch deliver a goodwill message. It is also a time when I continue the great SwissToni tradition of not giving a monkey's about what the silly old bag has got to say.

Mind you, when she's finished, the BBC are showing Shrek and then Toy Story II. Top quality entertainment for young and old, I think you'll agree. In the absence of anything else much happening around here, I think I might crack open some booze and settle in. The goose isn't in the oven yet and we haven't even thought about opening any presents.

The Jungle Juice appears to be working its magic, and we now have both patients in the kitchen arguing over the preparation of dinner. Ah. Some kind of normality at last! (and I've had my first drink too - a Leffe Blond during Shrek. Hurray!)

I shall now have another drink and watch the fantastic Toy Story 2 until I am summoned to prepare vegetables, which I will do with pleasure and good grace.... well, as much as I can muster anyway.

What's this? We might be getting our presents out soon? Let's hope it's before Doctor Who, eh?

This hasn't exactly been the day of my dreams so far, but actually it's not been so bad. It's been quiet, for one thing, and there hasn't been too much strife and hassle (and of course, I'm in my own house with some of my family and one of my best friends. Things could be very much worse).

I'm finding Doctor Who a little hammy, I'm afraid.... but at least I got to open a few presents before it started. 18:30 before a single present is opened. That must be some kind of a record. Most of my stuff seems to be edible so far, but frankly that's no bad thing.

....Ladies and Gentlemen, we have our first argument of the day.

Yes. The size of the parsnip batons has caused first annoyance, then disagreement, and finally a storming out of the kitchen. We have a winner.

We're finally eating. Well 3 of the 5 of us are anyway. The foie gras and Tokaji have just gone down nicely, and now we're carving the goose.

I'm not sure if I've got the appetite now. In the nicest way possible, pretty much all I want to do now is to disappear somewhere to be by myself and read a book.

We haven't yet finished opening the presents, and one person has already gone to bed.

The goose looks good though.

So that's more or less it.

C. followed her mum up to bed straight after we had finished preparing the vegetables, leaving her dad, Lord B and me. We chatted about football for a bit, ate the goose and had a drop of nice wine (listening to first The Magic Numbers, then Dusty in Memphis and then some Scott Walker).

It was nice. Really tasty food.... it's just that dinner was obviously a bit flat.

So now we've had a spot of pud, cleared up, and Lord B and I are sat watching some of 'Jerry McGuire' and having a cup of tea. Half of the presents are still to be opened, and will remain like that until tomorrow. So what? It's just another day, right?

Ah. Just listen to me whining. I should look on the bright side: I've enjoyed my day a whole lot more than those members of the household who have been ill.

God. Do I really want to end my day watching Tom Cruise though? really?

Well. That's it then. I think it's fair to say that it hasn't exactly been the day that I was expecting. It's not so much that it's been an anti-climax - surely every kid learns soon enough that after all that build-up, the day itself is pretty much certain to be a let down. It's just that I was hoping for something else. I was hoping for some nice quality time with the people that I love. This was supposed to be my first Christmas together with C. and it just didn't happen.

I don't want to moan too much though, as it could certainly have been worse, and I know I should be counting my blessings.... but.....

I think I'm going to watch the end of the film and go to bed. Tomorrow (ill people permitting), we're all supposed to be off to see my Mum and Dad. 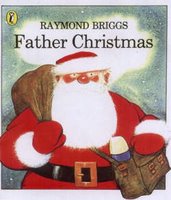 Happy Blooming Christmas to you too!
Posted by swisslet at 09:29