one is all that you can score 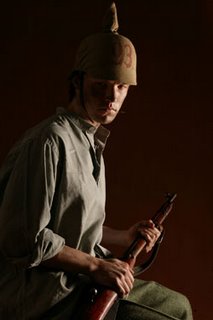 I went to the theatre this evening to watch "All Quiet on the Western Front". It's an adaptation of the novel by Erich Maria Remarque (which was also made into a film in 1930). The play eloquently describes the futility and pointless, indiscriminate slaughter of war as seen through the eyes of a young German soldier in the trenches of World War One (Wikipedia has a pretty good article on this if you want to read more about it)

It's a message that we've all seen countless times before - war is stupid and people are stupid - but that familiarity doesn't render it any less powerful. Of course, it's a message that just keeps on being relevant.... sadly it is as pertinent today as it was when the book was published in 1929.

The staging itself was wonderfully simple: a cast of 10 and very little in the way of scenery getting between the actors and the audience. The rat-tat-tat of machine gun fire was a spanner being dragged across a metal walkway and shells exploded with the slamming of metal trapdoors. Very simple and very effective.

One of the themes of the play is how none of the German soldiers has even so much as met a Frenchman, never mind have a reason for wanting to kill one, and yet that is exactly what they find themselves doing on a daily basis.

I found myself reflecting on that thought when I found this on some US Marine Corps site: 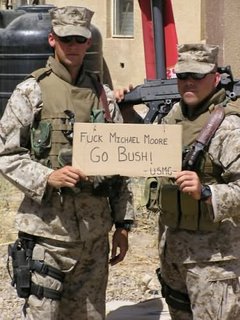 Hello guys and girls. I had the unpleasant opportunity to view the new movie "Fahrenheit 9/11" by Michael Moore last night. I have never been so offended in my life, he makes us Marines feel like we are over here fighting watching our friends and other troops die for no cause. Vote for Bush.
Semper Fidelis,
Corporal Howard II, W.M" (on the left)

Dying for no cause? I can see why no soldier would want to face up to that, and I don't in any way want to trivialise the fact that people are fighting and dying in Iraq (and elsewhere), but that's what it looks like to me.

I'm also reminded of the words of Muhammad Ali when he refused to be drafted to fight the war in Vietnam:

"No Vietcong ever called me nigger".

Actually no. Can't we just stop war full-stop?
Posted by swisslet at 00:06