are you just cool, but I'm just fake? 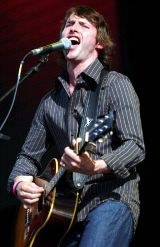 The first time I saw James Blunt on TV was actually his first ever live TV appearance, on Later...with Jools Holland. It was just him and his piano. He played "Goodbye My Lover" and was clearly extremely nervous. I thought he was terrible, to be honest. Over the next few days though, I found that I couldn't get the song out of my mind. This, coupled with a bit of TV advertising, was enough to send me out to buy the album, just as it was being re-released (having made little impact the first time around). I thought the album was ok. "You're Beautiful" and "Goodbye My Lover" were the clear standout tracks for me, but I thought that the rest of it wasn't bad, and there didn't seem to be any stinkers. I saw his was on the Glastonbury bill, and decided he was worth a look live.

Glastonbury took place just as "You're Beautiful" was starting to make an impression on the top end of the chart, but before it had climbed all the way up to the top. Because he wasn't a big act, Blunt's slot was at midday on the Sunday. It was a sunny day, and it soon became clear that word was getting out, and through the course of the set, a massive crowd gathered around the Pyramid Stage. Blunt himself has said that this was the moment when he knew that things were beginning to happen for him.

Bazillions of album sales later, Blunt finds himself in a fairly happy place. He has had a number one single and number one album in the UK (the album knocked Coldplay's "X&Y" off the top slot). He won two Brit awards the other week, and when he played the last notes in the Nottingham Arena this evening, he had just completed a sell out UK Arena tour. He also will have learned this week that "You're Beautiful" has just gone to number one in the US Billboard Chart.

Not a bad year.

So of course, there is a backlash in full swing, and plenty of people will tell you how much they hate him. Why do they hate him so much? Probably partly because of his posh army background (he was an officer in the Household Cavalry, and as well as leading an armoured column in Kosovo, he has guarded members of the Royal Family). In a world in which most English musicians are keen to emphasise their working class roots, Blunt also has an unbelievably plummy accent. It's not so much that he was born with a silver spoon in his mouth, more that he has the whole cutlery set. He has a fairly mannered singing style too, which probably grates a little if you're looking for reasons not to like him. And, of course, he's sold a lot of records to a lot of different people. There's nothing like massive popularity to put people off an artist. It's hard to look cool in your James Blunt t-shirt when you know your mum has a copy of the CD in her car, and your granny thinks he's a nice boy.

The audience at the gig this evening was probably a case in point: loads of kids, loads of couples and quite a few older people. A real mixed bag. We arrived at about 20:30 in time to catch the last song by the support act, and I wasn't really very surprised to see that the Arena was pretty full. The tickets said that doors opened at 18:30. You and I know that the main act won't be onstage before probably 21:30, especially if he has only released a single album's worth of material. Lots of other people will have insisted on being there before 19:00 so they didn't miss anything. There was a real hum of excitement too, not the kind of jaded nonchalance that you often get at cooler gigs at smaller venues, but the kind of feeling that lots of people were really looking forward to their friday night out at the arena. Actually it made something of a refreshing change, and it was nice to see an unknown (to me anyway) support act getting a really rapturous send off.

Blunt came on... and he was pretty good. He's clearly a much more confident performer now than he was at Glastonbury, but the set is more or less the same, with one or two new songs thrown into the mixer. "Goodbye My Lover" was a genuinely emotionally charged moment though: just Blunt at his piano underneath a spotlight, singing this passionate song to an enraptured crowd waving the gentle phosphorescent glow of their mobile phones at him. Ah, it would have been perfect....if only the stupid cow sitting behind me hadn't taken it into her head to start trying to have a conversation with the person who she was connected to:

"Can you hear it? CAN YOU HEAR IT? You enjoying it? YOU ENJOYING IT? yeah? YEAH?"

Argghhhhhhhhhh. It was all I could do not to make a grab for her phone and either hurl it across the room, or stick it somewhere it wouldn't be so bothersome.... for me anyway. Every song she recognised, she was on the bloody phone. Jesus.

The best song Blunt played all night wasn't actually one of his.... he's been doing a cover of the Pixies song "Where Is My Mind?" for a while now, and he played a stonking version of it tonight. To be honest, it made me want to go and see The Pixies, but he does a decent enough version of it.

And then he played "You're Beautiful" (unbelievably people were leaving - isn't this song most of the point of going to see James Blunt live?). I don't care what you think of this song really, you have to respect the power that it has over people. 20,000 people shared a moment as Blunt played this, and it was quite a thing to see. It's one of those songs, like "Angels", that just seems to reach out to people, and they get totally wrapped up in it. I won't say it was magical, but it was really very impressive.

Hats off to the guy, I say. He's not the greatest artist I've ever seen, but he's quite a long way from being the worst. Hate him if you want, but don't expect him to care. The Force is very much with him at the moment..... why can't we just celebrate the fact that a British singer-songwriter is being so bizarrely and unexpectedly successful worldwide? Why do we have to throw stones at him because he has escaped the indie ghetto? Far better this than Westlife, I say.

He's off to America now - presumably sent by the record company to cash in on his chart success. You don't stand a chance. You'll hear his accent and the country will be his for the taking.