I can see him back again 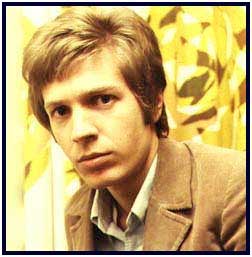 Regular readers will recall that I am a huge Scott Walker fan. In my opinion, no other male vocalist can get anywhere near the peaks reached by his honeyed baritone (look - I know I always describe it as a 'honeyed baritone', but it just fits, alright?) Almost as interesting as his voice, though, is his mystique. Here is a guy who went missing from the Walker Brothers when they were at the absolute peak of their success and was eventually found in a monastery (apparently he was traumatised by the experience of the group's car being rolled over by hysterical fans and of being left concussed by a fan stampede in Chester). Here too is a guy who hosted an extremely popular television show ("Scott") whilst at the same time releasing records filled with songs about existentialism and death, and featuring covers of songs by artists like Jacques Brel, Kurt Weil and Bertolt Brecht as well as his own compositions. His records initally continued to sell in huge numbers: Scott (1967), Scott 2 (1968) and Scott 3 (1969) all burst into the top 3 in the UK album chart. The honeymoon was soon over and his confused public quickly gave up the ghost - Scott 4 (1969) failed to chart at all... although artistically it was probably his finest album to date, featuring a song about Stalinism ('The Old Man's Back Again'), and one ('The Seventh Seal') inspired by Ingmar Bergman and telling the story of a knight playing chess with Death.

After that.... not very much. There was a Walker Brothers reunion tour in 1975 and a brief flirtation with country & western, but essentially Walker became a recluse. He's released four albums in the last 30 years - none of them in the least bit commercial, and culminating in 1995's Tilt, which doesn't even really go in for conventional devices like a tune or recognisable verses and choruses.

It's utterly amazing. An incredble piece of art, albeit not one that you will want to listen to every day.

And now comes the news that Scott Walker will release a new album - The Drift - later on this year. There's a snippet of news about it in this month's Q magazine:

New track 'Psoriatic' begins with the sound of a giant pea rolling on a table and features percussion on a wooden box covered with dustbins. Another, 'Hands Me Up' ("Written around the fulcrum of celebrity television"), includes a bizarre instrument called a tubax. "It's a giant saxophone, even larger than a tuba," says Walker. "There are only two in the country." The album's most potentially controversial track is 'Jesse'. Written a month after 9/11, it brings together the attacks on the World Trade Center with Elvis Presley's still-born twin brother, and "deconstructs" Presley's 'Jailhouse Rock' along the way. "It starts with the basses sounding like planes coming in," he says, "while substituting the 'Jailhouse Rock' drum riff with whispered 'pows' for planes hitting the towers."

Giant peas? A tubax? 9/11? I think they'll struggle to file this one under "Easy Listening".

Coming soon to an earworm list near you.... maybe.
Posted by swisslet at 22:03