who cares what picture you see? 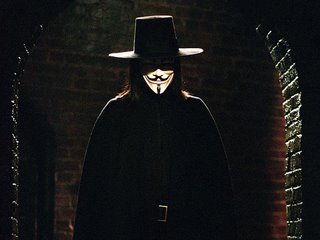 Having not been to the cinema for a good couple of months, and perhaps not since Christmas, another visit was long overdue. So I went twice. On Saturday night we went to see "Walk The Line" and this afternoon we went to see "V for Vendetta". More about Johnny Cash later, but let's deal with 'V' first....

Right. I'm not one of those über fans who has cherished the first edition releases from 1981 (I only read this for the first time last year), but let me say that if you haven't read the Alan Moore comic book that this film is based upon, I strongly urge you to do so. It's an utterly beguiling and powerful read and, as you might expect, contains layers of subtlety and depth that no film could possibly hope to cover. I'm guessing that the reviewer from The Times who gave the film a one star review and called it "V for Vacuous" hadn't read it:

"It's hardly surprising that Moore washed his hands of the film. His creepy freedom fighter, V, is a disfigured über-terrorist who blows up the Old Bailey one night with fireworks and announces on TV that he will do the same to the Houses of Parliament on November 5th. He delivers his threats in Shakespearean doggerel and spouts pseudo-waffle about the immortality of ideas...."

For someone who has read the book, that isn't so much criticism as an affirmation that the film has been faithful to the original. Of course, that doesn't invalidate the criticism. If reading the comic is a pre-requisite to enjoying the film, then the film will die on it's arse... and judging by the fact that it only came out on Friday and my multiplex only has it on a single screen and about three showings a day, that's exactly what will happen to it commercially.

I thought it was okay. There are inevitably one or two amendments to the plot, but nothing massive, and that in itself is something of a triumph. Lest we forget, this film is about someone whose ideology is fundamentally opposed to his government; someone who believes that violence is both necessary and justified; somone who is prepared to strap himself with explosives and hold a government to ransom; someone who blows up the Houses of Parliament and other landmarks in the London skyline. In many ways, I'm surprised that this film got made at all. We are about to surrender more of our civil liberties so that our government can better fight its "war on terrorism" - how comfortable do we feel watching a film where we are asked to take the side of the terrorist? Or is he a freedom fighter? Ah, it's all a question of perspective, isn't it? 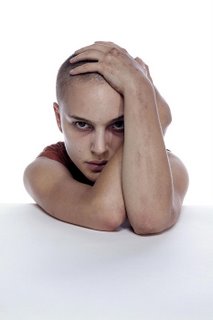 The lovely Natalie Portman - especially for Lord B

About halfway though the film, I realised that I was actually really quite enjoying it. I'd heard that the effects were ropey, that Natalie Portman's accent was appalling, that the central premise of having a masked character as your lead simply didn't translate to the screen. Not true..... (Portman's English accent is certainly no worse than Stephen Rea's wandering Lancastrian burr). It was going really well, and then I felt that the film lost a little pace and it began to feel like it only had just the one point that it was emphasising again and again and again. All that 'people shouldn't be afraid of their governments, governments should be afraid of their people' stuff .... Very good, but in a film stretching over two hours long and with some of the subtletly of the original plot taken out, it began to feel a touch heavy-handed (to be fair, this is a criticism levelled by some at the original comics too).

It's far from a bad film though.... worth seeing, definitely, although possibly not worth repeat viewing.

I'd be really interested to hear what someone who hasn't read the comic thinks of it.... 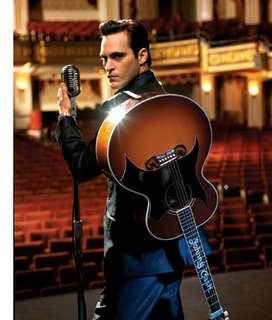 'Walk the Line' is a different kind of film altogether, but it is one that I could easily imagine myself watching again. Of course, both Joaquin Phoenix and Reese Witherspoon were nominated for Oscars for their performances (Witherspoon winning, and Phoenix losing out ot Phillip Seymour Hoffman) and both are excellent. Both stars did all of their own singing; a big risk, but ultimately the fact that they are so good was probably the making of the film. I'm a big Cash fan, and it's a tribute to both stars that it's not until the final credits that I am anything less than convinced by their vocal performances: as the credits roll we hear the voices of the real Cash and Carter singing for the first time in the film. As soon as I heard it, I was struck by two thoughts: that Witherspoon's impersonation of June Carter had been uncanny, but also that Phoenix hadn't quite captured Johnny Cash. Of course, Cash had such a deep singing voice (daddy sang bass and all that...), that it would have been an almost impossible task, and it's credit to the quality of Phoenix's performance that a direct comparison with Cash didn't really occur to me until I was putting on my coat and heard the real McCoy. 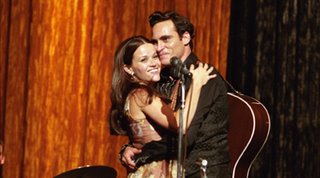 Not that it matters all that much, but I'm also not sure how much Phoenix's performance was about Johnny Cash, and how much was about him making full use of those big, puppy-dog eyes. Those big close-ups of his face with his eyes brimming with tears and his face a picture of hurt and bewilderment.... seen it before. (and as a historian, I am honour-bound at this point to mention that this view of the Cash-Carter story naturally plays down the parts of other key players like Cash's wife and Carter's first two husbands.... hell, they're just collateral damage in the wake of one of the great love stories, aren't they?)

I'm quibbling though. It's an excellent film, and I really enjoyed it. It made me want to go home and put on some Cash records, and you can't say fairer than that. I hope it has that effect on everyone who sees the film.

So that was my weekend (oh, apart from going for a run, viewing a recently refurbished house, watching about six hours of rugby on the telly, watching the "Firefly" pilot....etc. etc.).