it gives me a sense of enormous well-being.... 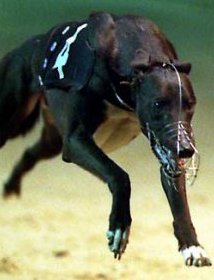 I had a night out at Nottingham Dog Track this evening, and it was great. It was a work outing (something to do with improving morale, so naturally about 10 people turned up). For £7 I got entry to the stadium and a race card, a pie and pea supper, two free drinks, and two free bets.

What I love most about Greyhound racing is that the racecard contains an incredibly detailed guide to the form for every single race. For each of the six dogs running you get to see the details of their last 5 races (their starting position, where they finished, what happened to them during the race, their time, how far they were behind the winner, the winner's name and time...). You also get to find out the parentage of each dog, how old they are, how many times they have won. Loads and loads of information. Some people also swear blind that you should watch the dogs as they are led out towards the traps to see which dog...er...unloads itself before the race. The theory presumably being that this makes it lighter and less distracted and thus more likely to win the race.

As best I could tell, all of this information is useless and the whole thing comes down to blind chance. If your dog is sniffing its arse when the trap opens and the race starts, then it won't win. Full stop.

I actually finished the night having picked three winners and in credit, so you won't hear me complaining too much.
Posted by swisslet at 22:19