feel the magic, hear the roar...

---
Earworms of the Week

No, I don't know why this one has popped into my head either. Perhaps it's because Big Brother has just started over here, and apparently contains as many freaks as usual. The twist this year is that one competitor will enter the house as a result of finding a "Golden Ticket" inside a chocolate bar. Apparently it's already on Ebay (ah... it's been removed. Shame).

I kicked my habit last year when I didn't watch any of it for the first time. I'm not planning on starting this year.

Courtesy of Mark (again!). I have a feeling that Mike Skinner originally had Chris Martin in mind when he wrote this song, and it certainly seems to suit his voice. I still think Leo the Lion does it better though.

8. "The Youngest Was the Most Loved" - Morrissey

I'm still pretty unconvinced by "Ringleader of the Tormentors". I was listening to it again this afternoon, and it seems ok, but only ok. It's been ecstatically reviewed of course, but don't reviewers often compensate for the good album they missed by being overly enthusiastic about the next one ("Be Here Now" springs to mind, as does "The Great Escape")?

I was supposed to be going to see him play at Birmingham Symphony Hall tomorrow night too.... until SeeTickets decided to release my tickets back onto sale because they made a boo-boo and promptly sold them to someone else.

(I have read that his setlist is a bit lacklustre as well, although I loved this review from someone seeing him for the first time. She crowd surfed! She grabbed a piece of his shirt! She broke her glasses! Quite a debut.)

Purely for the wailing guitar solo that bursts out unexpectedly about halfway through.

Check it out here (link is top right, but you also get a great picture of dapper Des on there too).

I've rambled about this lot enough this week, to be honest. Great song.

Brought to mind by my piece in the Art of Noise A-Z this week. It's a great song in its own right, of course, but it is made brilliant by Lou Reed's "Just watch me now!" about halfway through.

June 3rd is going to be a busy day for me:

--> it's the second day of the Trent Bridge Test match (fancy dress day!)
--> an old friend is having a wedding party at her house
--> the Futureheads are playing at Rock City

I will be dressed as a World War II RAF pilot for at least two of these, and expect to be thoroughly legless for all three.

This is the one that samples Soft Cell's "Tainted Love". I'm not entirely sure that I like it, but it's certainly as catchy as hell.

2. "Steady as She Goes" - The Ranconteurs

The opening single from Jack White's side project and a wilfully retro little number (like their website, which is ace). It's not big, and it's not clever... but it rocks.

I wasn't that impressed with the album on first listen, but it's really grown on me over the last twenty-four hours. I bet they are excellent live too.

More news on the blood doning front today too. I had a nice letter and a certificate thanking me for all my contributions over the last few years. They also asked me if I'd like to become an ambassador for the National Blood Service.

Well, what can you say to an offer like that? 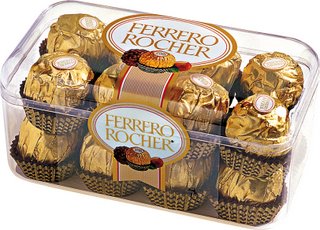 Excellente!
Posted by swisslet at 20:52