It was me who always spluttered every time we spoke 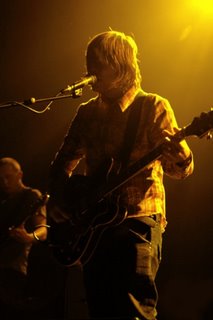 The Marcus Garvey ballroom is located somewhere out in the wilds of Lenton in Nottingham. It’s the kind of place where you leave a car at your own risk, so Lord B and I parked up a mile or so away in the rather more salubrious environs of The Park and walked through the warzone to get to the gig. Once we were through the metal-detector at the door, we headed up a couple of flights of stairs and emerged blinking into what is actually a pretty decent venue. It’s maybe a bit more battered and a bit less glamorous, but the Marcus Garvey Ballroom reminded me quite a lot of the Blackpool Empress Ballrooms: it has a large barrelled roof, a wooden floor and reasonable acoustics. It’s bigger than I imagined too – certainly larger than the Rescue Rooms, and perhaps if it was rammed to the rafters would nearly be a match for Rock City. It wasn’t rammed to the rafters tonight though. In fact, there was really only a scattering of a couple of hundred people, and barely anyone at all behind the mixing desk. I know it was the night of the Champions League final and an English team was competing… but I would have thought that more people would have made the effort. Still. The atmosphere was decent enough, so we bought a couple of pints and settled down to watch the support act, who were in full swing when we arrived.

I’m not familiar with The Fallout Trust, but they have a name that is perhaps unfortunately close to Fallout Boy, and even more unfortunately don’t have any songs that are anywhere near as good as “Sugar We’re Going Down”. I suppose they were decent enough, but I couldn’t really get over the fact that their lead singer looks like one of the most awkward front men that I have ever seen. He had a touch of the awkwardness of Ian Curtis about him, but none of the mesmeric talent. In fact, he looked like he had been plucked out of the Maths department, dressed in a pair of ill-fitting slacks with the braces hanging down and popped onto the stage with a microphone. Still. What do I know? According to their flyers, no less an organ than “Artrocker” declares that their debut album (“In Case of the Flood”) was “…a slinky, polished and well-produced collection of pop songs”. And perhaps it is. Perhaps it is.

Morning Runner came out onto the stage at about 10pm, and I was instantly struck by how much more charismatic a stage presence they have than their support. It’s funny: their singer seemed shy and tended to mumble and hide behind his fringe when he was talking to the crowd, but he still effortlessly had a much greater hold on my attention than the gawky guy from The Fallout Trust. They’ve got the songs too. To be honest, I’ve not listened to their album (“Wilderness is Paradise Now”) very much, and I’m only really familiar with the single “Burning Benches”, but they were good. They have a pianist, so inevitably they get compared with Coldplay and Keane, but the truth is that they don’t really sound like either of those bands. They have a harder, more guitar based sound, for one thing. In spite of their mainly melodic sound, they also have a faint tendency to wander into what could almost be described as heavy metal wig outs – something I approve of greatly. They certainly inspire passion in their audience: I kept finding myself mildly distracted during the course of Morning Runner’s set by the guy standing just in front of me. He had a shaven head, was pretty hefty and was wearing an off-white polo shirt with an upturned collar. In short, he looked a bit rough…. But he was also utterly captivated by the band. He had a look of blissful rapture whenever they played a slow one, and bellowed along to the louder ones. It was quite a sight. More thugs should listen to sensitive music. Perhaps it should be part of their rehabilitation. If more violent criminals listened to people like Thirteen Senses, Morning Runner or Keane, I’m sure the world would be a lot nice place.

As far as I could tell, the setlist consisted of most of the tracks on their album and a clutch of extremely well received b-sides. They were on for about 50 minutes and then it was back through the metal detectors and out into Nottingham’s drizzly badlands to see if the car was still there. It was (although I might take a cab when I go to see Devendra Banhart at the same venue later in the year).