Or just a cold and lonely lovely work of art? 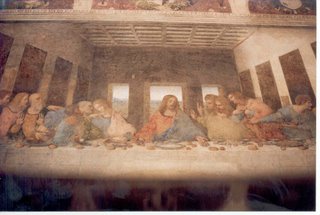 In case you were wondering, I did manage to get past page 50 and finish off the Da Vinci Code. It's poorly written, badly researched nonsense. Of course it is. The plot is certainly ridiculous...but..... it does roll along quite nicely, and once I'd got over that initial hump, I was able to stay interested enough to get to the end. It might be damning it with faint praise, but I've certainly read worse. That's not to say that I intend to read any more: people have been busy telling me that "Angels and Demons" is a better book, but I reckon I'm done with Dan Brown. One is more than enough, thanks. The plot's ok, but really I can't think of another book I have read that is so badly written. Dan Brown seems to only have a passing acquaintance with the English language and its proper usage. Rather distressingly, that doesn't seem to have got in the way of the book selling something like 50m copies worldwide. I'm fairly sure that with sales like that, Dan Brown can afford not to give two hoots for stinging critiques of his style.

Or is it just good that people are reading at all? (this is usually the argument wheeled out in defence of the Harry Potter books - don't worry too much about the quality of the book, just be pleased that kids are reading anything at all). Maybe I'm just jealous. I should stop reading and criticising this tripe and focus instead on writing something of my own instead. I'm not greedy - I don't expect to sell 50m copies.... one or two million would be plenty. I don't want Tom Hanks in my film though.

Actually. My view on the book has softened somewhat since I went to see the film last night. The film manages to include all of the bad things about the book, whilst at the same time removing the driving plot that keeps the book moving and keeps you turning the pages.... The film is wordy, pretentious, overly long and dull, dull, dull....

The film makes the book look good. What else can I say? The church are wasting their breath complaining and campaigning against this film. They should let it stiff on its own merits.

I'm off to Paris on Thursday, and I'm planning to visit the Louvre for the first time. What's the betting I can't get anywhere near the Mona Lisa?
Posted by swisslet at 17:59