whatever's pulling you isn't pulling me 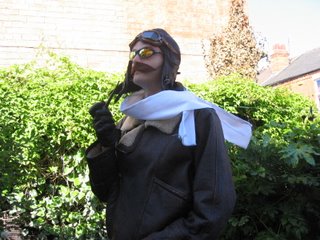 As you will know, I'm a big cricket fan. There is very little that gives me more pleasure than getting totally absorbed in a good game of Test cricket. Football and rugby give a more immediate fix of sporting pleasure, but there is something magical about the slow and sustained release of a five day game of cricket. I try and get to a couple of matches every year, but because I live about a 5 minute stroll from the ground, the Trent Bridge Test Match is always a highlight of my year. The ground is on my route to work, and as I was heading in on Tuesday morning, I saw that they were busy putting up the big replay screen and generally getting ready for the first day's play on Friday. That put a smile on my face that has stayed there for pretty much the rest of the week.

Friends began to arrive on Friday night ready for the dawning of a big day in our sporting calendar.... fancy dress day. 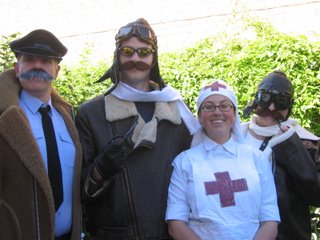 For some unknown reason, it has become traditional to go to Test Matches in this country in fancy dress. We've been doing it now for several years, and we've done a number of themes: Star Wars, Santa Claus, Fred Flintstone, The Spanish Inquisition.... but this year I think we excelled ourselves with a "Biggles" theme. Mind you, I did question the wisdom of this a little when we put on our sheepskin lined coats and leather flying helmets on one of the hottest days of the year so far... but if we could do Santa in August, then I thought we could manage this. 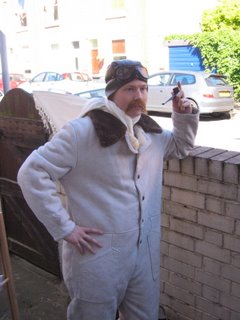 There were 12 of us going in total, and 10 were dressed up - it's an absolute blast from start to finish. I will always maintain that we do this for our own amusement rather than for the attention, but dressing like this does tend to get you noticed. At one point I became aware that everyone around me was turned to look at me and pointing.... and then realised that there was an enormous picture of me on the big screen. I'm proud to say I resisted the temptation to look directly at the screen (as I always laugh at people who do this on the telly - they turn away from the camera to look at their own backs being displayed on the screen). Instead I remained calm and simply chugged on my pipe... 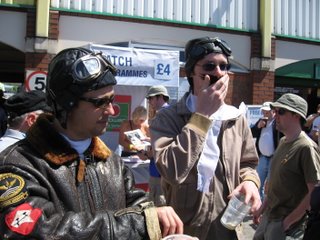 Statue John and Mik enjoy some downtime before the next sortie

The cricket was a little turgid - barely 200 runs were scored in the day and England were struggling a bit - but it was still a great way to spend 7 hours or so: sitting in the sun with a few beers, some cake and some old friends. 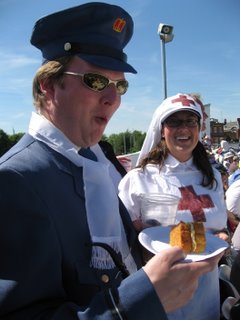 We were actually filmed doing some vox-pops by Channel 5 during the lunch interval, and you can see the clip of that here... I'm not sure how long it will be up for, and I'm not smart enough to download it and stream it (any ideas Adem?). Still it's only a couple of minutes long, and if you want to hear what I sound like, hang on to the very end!

In previous years I have been something of a shambles by the close of play, and good for nothing other than flopping out in front of the television and going straight to sleep. This year I had to be more disciplined: first I had to go to a wedding party, then I had head out to Rock City to see a gig. 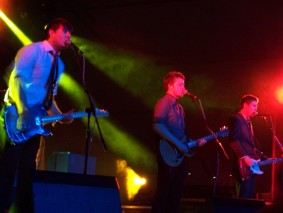 I suppose I've only got myself to blame really. It was an ambitious schedule, but I was doing so well. I got back from the cricket in a pretty reasonable shape, showered and changed and got out to the party by about 19:30. By about 20:30 I was arranging a cab with Sarah and heading into town for the gig. We were a little delayed, but arrived at Rock City at about 21:05 to meet up with Rich and Laura and head inside. I thought this would be okay -- albeit I had wanted to get there a bit earlier -- when Lord B and I go to see bands normally at this venue, they don't come onstage until nearly 10pm.

...As we got out of the cab, the Futureheads were just finishing "Hounds of Love". We dashed in, and I prayed fervently that it was something they played at the start of their set. Unfortunately (and inevitably) it wasn't. They played two encores but we were still back outside Rock City by 21:45.

It was still light.

They can't have played for much more than an hour in total, and I suppose we probably saw about half of the set. To say I'm disappointed is probably to overstate the case a little. I was a little bemused though. I suppose Rock City have a club night on Saturday nights and were keen to make sure that the gig didn't get in the way...but....I am a bit cheesed off. Doesn't that sound early to you? All over before 10pm?

What I saw was okay, but I do think they were a tiny bit lacklustre. The lead vocal was a bit buried in the mix, which wasn't great, but I also felt that the new stuff sounded a bit flat. "Back To The Sea" and "Skip to the End" sounded great, but the rest... so-so. I think missing the beginning of the set might have affected my judgement out though: perhaps if I'd seen them playing "Meantime" and "Hounds of Love", then I'd have been in a better mood.

"Decent Days and Nights" and "Carnival Kids" were a superb way to finish though.

I suppose I did get to see their full set at Glastonbury last year, and I'm sure I'll get another chance to see them properly. Perhaps I'd better make sure I get to Rock City a bit earlier when I go to see We Are Scientists on a Saturday in November then, eh?

I'm not going to give this gig a mark either.

I had a nice day at the cricket today too..... albeit dressed a touch more practically this time. It looks like England are going to lose, but it's still a beautiful ground and a great game. 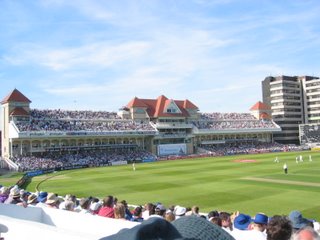 How are you? Good weekends?
Posted by swisslet at 20:40