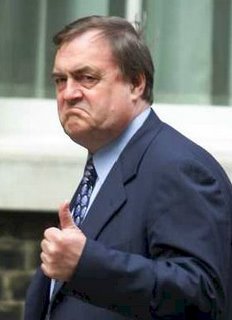 According to the Deputy Prime Minister of Britain, George Bush is "crap".

Who knew? John Prescott: idiot savant, and not just 'idiot' as had widely been assumed.

Hats off to John Sentamu, the archbishop of York. Whilst the British Prime Minster suns himself on a Bajan beach, the second most senior cleric in Britain has cancelled his holiday so that he can sit in a tent inside York Minster for the next seven days on a liquids only diet to highlight the plight of the people suffering in the conflict in the Middle East.

Dr Sentamu said: "This act is a rallying call to people of all faiths and none, to encourage them to feel that there is something that can be done. The UN has a role, diplomacy has a role and our government has a role to play in bringing this conflict to an end. But we as people also have a role to play in showing our common humanity with all those who are suffering."

Common humanity, eh? Isn't that something that politicans have removed when they take up office? I'm not a religious man by any means, and I'm not sure that this protest amounts to much in the grand scheme of things, but at a time when our most senior politicans are rolling over to have their tummies tickled by the US, it's nice to see someone --- anyone --- standing up to be counted.

Thank the Lord that Christianity had nothing to do with creating the mess in the Middle East, eh?
Posted by swisslet at 22:06