we had dreams and songs to sing.... 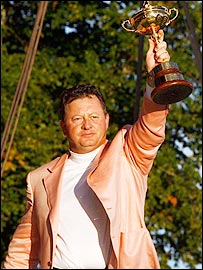 Woosie might have been stretching it a bit when he said that it was the greatest week in history, but I'll be blowed if the Ryder Cup isn't the single best sporting event in the world. I was at the Belfry in 2002 and thought that was the pretty good, but this week at the K Club in Ireland has completely blown it out of the water.

What else can I say? I was there for four days, from the second practice day on Thursday all the way through to the singles matches on Sunday, and it was just magical. I was very, very lucky to be there. 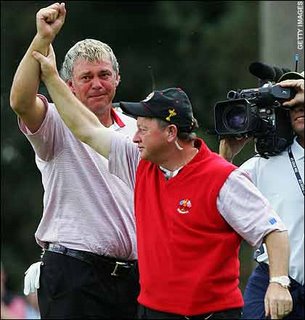 We stood in a number of places throughout the week - the first tee, the first green, the third, the fourth, the sixth, the eighth.... but the one place that we kept heading back to was the green at the sixteenth. This is the K Club's signature hole; a par 5 dog-leg that finishes on an island green. It's a difficult hole to play, and players have to make a crucial decision: do they go for the green in two and risk a watery end in the hope of a chance at an eagle three, or do they lay up and play for a birdie at best? That risk/reward decision makes it an interesting place to watch golf, but what makes it perfect is the huge scoreboard and a big screen showing action from around the course. There's a huge grandstand there, but we always chose to stand at the front alongside the river Liffey. From there you not only get a brilliant view of the hole, but you also stand right alongside the path the players and their VIP supporters have to take as they walk to the green. At various times as I stood there, as well as the players, I was within touching distance of the likes of George Bush Sr, Michael Jordan and Bill Clinton. None of that mattered. I was also there when Darren Clarke finished his match against Zach Johnson on Sunday. The Ryder Cup had already been won and the scorecard was awash with the blue of Europe, but this was the place to be. Darren Clarke's wife died six weeks ago after a long battle with breast cancer. It was amazing that he was here at all, nevermind that he was able to play such sensational golf. It was apparently Heather's final wish that he play in this match and that he did himself justice, and I watched him play the first hole of his opening fourballs game with Lee Westwood on Friday morning, and not only did he hold himself together, but he boomed an enormous 320 yard drive down the fairway and promptly won the hole. At the sixteenth, with his work finally done, Clarke finally let go and broke down into tears and collapsed into the arms of his caddy. It seemed as though all of the other European and American players who had finished their games were there, and all of them took turns to embrace the sobbing Irishman, cheered on by an amazing crowd of about 20,000 people. It was an incredible moment and I'm sure there was not a dry eye in the house. I know I was in tears and I'll never forget it.

I could go on and on, but I'll spare you. Suffice it to say that I had a fantastic time. It was hard work (up at around 5am for four days and then on my feet all day) and the weather was a little variable.... but what an incredible way to spend a few days.

I even quite enjoyed the opening and closing ceremonies... especially that bit where they attempted to interpret the illuminations in the Book of Kells through the medium of dance.... inspired! 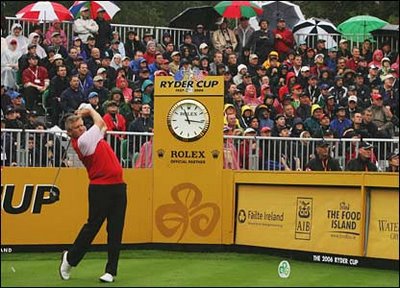 I'll leave you with a quick game of "Where's Swiss?"

Above you will see Colin Montgomerie teeing off his singles match against David Toms on Sunday. Somewhere in the background, I am sat in the grandstand. But where? Can you find me?

Guesses below. The winner (or maybe just the funniest guess) will receive the t-shirt I got given at the launch of our new IT organisation at work the other week. What about that, eh? It's pretty difficult.... but what a prize!
Posted by swisslet at 19:40