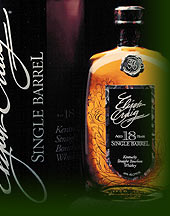 As we stepped out of the Royal Academy on Sunday afternoon, we inadvertantly stumbled upon a fantastic little food emporium. It was called Fortnum & Mason or something, and they have an understated little shop somewhere around Piccadilly. We had a little poke around, and I was surprised and delighted to find that they stocked Elijah Craig 18 year old Single Barrel Bourbon.

As far as spirits go, I tend to be a whisky drinker, and I'm particularly fond of the peatier end of the spectrum of Islay malts (Lagavulin, Laphroig... that kind of thing). In spite of the fact that it's at the opposite end of the whisk(e)y taste spectrum to some of these fiery malts, I've also always had something of a taste for a decent Bourbon. I find Tennessee Bourbons like Jack Daniels to be a little too harsh and metallic for my tastes, but I really love the warm, soft, caramel flavours of a good Kentucky Bourbon. Elijah Craig is my absolute favourite - the standard 12 year old stuff tastes wonderfully of vanilla and toffee, and it is now pleasingly available in the off licence around the corner from my house. I'd heard that the 18 year version was even better, but it's like bloody gold-dust. You occasionally see it in swanky cocktail bars, but my attempts to get hold of a bottle of the stuff had been frustrating and I'd been limited to a tantalising snifter in an extortionate cocktail bar.

Not any more. I am now the proud owner of a bottle of this precious liquour from barrel number 1430, barreled on 2nd June 1981. It wasn't cheap, but by God I think it's going to be worth it.

To complete my epicurean delight, as well as picking up some nice looking coffee, a fruit cake and a tin of leatherwood honey, we also found a bottle of Rosso di Montalcino. You might just remember that C. and I stayed in Montalcino earlier this summer and discovered what is reputed to be the finest wine in Italy - the Brunello di Montalcino. The Brunello is all well and good, but it is expensive and needs to be cellared for at least a decade to taste it at its best. The Rosso di Montalcino is one of those wines that is meant to be drunk while it is fresh, and it certainly shouldn't be cellared. It is much cheaper than the Brunello, delicious and ready to drink now. I don't think much of it makes it outside of Tuscany to be honest, so as soon as we saw they had some in stock, it didn't take much decision making to grab their last remaining bottle.

After this, all I could do was stumble into Soho and fall into the first decent looking brasserie that we found. Luckily for us, it was quite a nice one. I had dressed crab, fish stew and a plum and almond tart. C. had wood pigeon breast salad, vegetable tagine and a sticky toffee pudding with ice cream. All washed down by a nice bottle of Muscadet de Sevre et Maine sur Lie.

In the interests of completeness, I should probably add that we had Square Pie, mash, peas and gravy in Selfridges for lunch on Saturday, followed up by a Krispy Kreme donut, and C's brother whipped us up a delicious feast of organic farmer's sausages for our tea.....

Christ. Is anyone else feeling hungry?
Posted by swisslet at 19:05