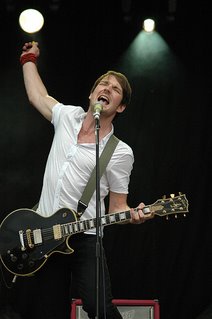 I first saw The Feeling at the Social back in March this year, just as their single "Sewn" was breaking into the charts. I remember thinking they were pretty good, but being mildly amused that they were quite so retro.

Snigger if you want, but there's definitely more than a little hint of 1970s MOR about their sound. Sometimes it's just blatant theft. I honestly didn't think it was impossible that they would play a cover of "Life is a Minestrone".

There were maybe 200 people there that night. Rock City holds about 2,000 people, and tonight it was absolutely pumping. Well, I say pumping, but actually it would be more accurate to say that it was gently swaying. We arrived just as the band were playing their first song. The venue was crammed to the rafters, but instead of being full of sweaty indie kids all pushing to get to the front, it was filled with lots of 30-something year old couples, politely sipping on their drinks and maintaining a discreet distance from the people around them. It was a bit weird, and made the place appear fuller than it actually was. It also made it something of a struggle to get to the bar (especially as they started playing "Fill My Little World" just as we started to move) .

The gigs I usually go to are a largely male affair. Sure, there are women there, but they are usually outnumbered five to one. This evening, it was at least 50:50 - maybe more (although oddly, there were also a surprising number of fat blokes with bad haircuts. Go figure). It made quite a pleasant change actually (although I have to confess that the indie snob in me was just a tiny bit embarrassed to be there... I knew I should have worn a Mogwai t-shirt or something)

The band? They were good. They reproduce their album very efficiently, but they also do a nice little show. Dan Gillespie-Sells really went for it: throwing himself around the stage, spinning in circles as he played each guitar solo, climbed on the monitors and drum riser at every possible opportunity and scissor-kicking down as the rest of the band sang tight little "ooooh ooooh, ahhh ahhh" harmonies around him. The crowd lapped it up. I've not seen a band so well received at Rock City for a long time. On occasion, the screaming was at such a high pitch that you could almost close your eyes and imagine you were watching a boyband.

The songs? Well, it's impossible not to smile when listening to The Feeling, but there's no denying that they are the cheesiest band I have ever had the pleasure of watching perform live. Lord B described them as the M.O.R. version of The Darkness, and that's an excellent comparison. Like The Darkness, the joke worked brilliantly for one album, but it will be fascinating to see if they can sustain the interest with the second album. The Darkness failed dismally and disappeared straight up their own noses. I wonder if The Feeling will be any different. If the one new song they played is anything to go by, they won't be changing the formula any time soon. Who can blame them? Their career is going very nicely, thank you very much. Songs like "Sewn", "Fill My Little World" and "I Love It When You Call" are just irresistible. And as if that wasn't enough, they also played a cover of "Video Killed the Radio Star". Game, set and match.

Fun, but they really are sickly, sickly sweet.