I've got the ill communications... 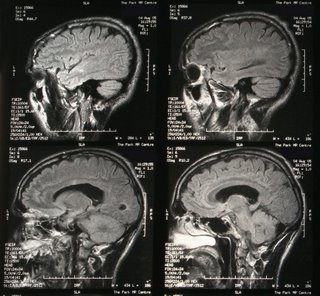 My parents are visiting this weekend. Amongst other things, my dad brought up a copy of the neurologist's report on me that he was copied in on (you might remember that I saw this guy back in early October). I hadn't actually seen this yet, so naturally I was curious.

Here it is in full:

"Thank you very much for referring this pleasant young gentleman who had an episode of transverse myelitis in 2005. This has left him with residual symptoms. He is a right-handed IT consultant. In June 2005, he woke up and noticed parathesia [pins & needles] in the right arm, which slowly spread out to involve the whole arm, trunk, thigh and knee and then went over to the left side, which involved the hand. Initially there was an improvement, but that was incomplete, and he has residual symptoms. These appeared to be more prominent recently and in part that might be explained by him continuing to perform strenuous exercise.

You saw him and noticed that he had an examination consistent with myelitis. You obtained an MRI scan, which indeed showed an inflammatory lesion in the cervical spinal cord as well as some subtle changes in the brain including some enlargement of the posterior body and occipital horns of the lateral ventricles with a slightly corpus phallic appearance. There was possibly some signal change in that area.

He continues to have primarily sensory problems in the arms and legs, but as I mentioned, he is very active. He was originally training for triathlon and he continues to play football, runs and swims. He can still do all of this, but not at the same intensity and he gets tired more readily. He denies any difficulty with eyesight. His past medical history is notable for campylobater food poisoning with severe diarrhoea lasting for about 2 or 3 weeks with major weight loss from which he never recovered. At the time of his infection, in the period following it, shortly he denied any neurological symptoms. Since 1995/6 he has low back pain and is seeing an osteopath and exercise appears to help.

Family history is notable for his mother having some heart problems. There is also a history of glaucoma in his mother. He has brothers who are all about 6 foot tall, but not necessarily as thin, as in fact, he lost weight after the campylobacter infection. They also all wear glasses. There is questionable Marfan's feature, which potentially could explain the low back pain.

He takes no medication. He has no known drug allergies and has had no pets. He does not smoke and drinks about 15 units a week. His walking distance is practically unlimited.

On examination visual acuity was 6/5 in both eyes corrected. Cranial nerves and brain stem were normal. Power was potentially only very slightly reduced in the left ankle dorsi flexion and he had some slight difficulty, mostly subjective, hopping more than 10 times on the left foot. His gait was normal. The reflexes were ever so slightly brisker on the left. He had decreased vibration in both lower extremities, mostly on the right and slightly decreased pin prick on the right leg. He denies bladder or bowel problems, memory or mood disturbances currently. He does report some fatigue.

EDSS 2.0. [this is a scoring system to guage suitability for interferon treatment. >2.0 is needed to be considered suitable]

I think he has transverse myelitis and that the symptoms are only the residual symptoms from that event, with no current evidence of dissemination in space or time to fulfil the criteria for multiple sclerosis. He knows, however, the implications of his condition. It is difficult to assess the risk of this recurrence becoming multiple sclerosis, given the only very subtle changes in the brain MRI.

I advised him to continue leading a normal life, which he appears to be doing anyway. He is somewhat concerned as to why he has residual symptoms that tend to be even more prominent, but I think it is reassuring that he does not have any new neurological problems since the event in 2005.

I am obtaining a number of blood tests. This will include ganglioside antibodies, which can be triggered by campylobacter infection, but the significance for of that for spinal cord rather than peripheral demyelination is unclear."

What are you supposed to make of that then, do you think?

I've had the blood tests back, and they were "negative or normal", which is good and rules some of the more unusual things out. This leaves me in the same boat as I was before --- we wait to see if this turns out to be something more than a solitary episode.

My dad takes this as being good news, and I suppose it is. Well, it's not worse news, anyway.
Posted by swisslet at 00:27