Indigo burns on their arms

It’s exactly three years to the day since I got my tattoo.

I’d been thinking about it for some time. I wasn’t sure exactly what I wanted, but I knew I wanted to get something done. C. said that if I was going to get one done, I should go to a tattoo parlour that she came across when she lived in Amsterdam. Apparently they had done an outstanding job of her friend’s belly button piercing, and had an excellent reputation. Amsterdam is of course an old port, and tattoos have long been associated with sailors. Historically (and not very surprisingly) the best tattooists have tended to set up shop in ports. If I was going to get a tattoo done, then going to Amsterdam somehow seemed like a better idea to me than going into a tattoo parlour I knew nothing about in landlocked Nottingham.

So I waited. About nine months after that conversation, I happened to be in Amsterdam for a certain person’s 30th birthday and I decided to go for it. I had a look in the tattoo parlour, found a design that I really liked and took it from there. About 90 minutes later and I was marked for life. It didn’t hurt much – it feels a bit like having mild sunburn – and although I was nervous, I was enormously encouraged by something that happened when a guy and his girlfriend came into the shop when I had just sat in the chair. The guy who was tattooing me paused for a moment to have a chat with them. “Let me see it then” says the tattooist to the man, and the guy rolled up his sleeve to display a tattoo that he had had done the year before. We were all very impressed that the tattooist had remembered this guy. It turns out this guy had been so happy with his tattoo that he had brought his girlfriend all the way over from France to have her first tattoo done. When you hear that kind of thing, you know you’ve come to the right place.

It was an extremely positive experience for me. From the first moment I looked at the tattoo on my arm, I loved it. It made me feel slightly different then, and it still makes me feel slightly different now. Tattoos are everywhere of course, but mine is pretty discreet and is almost always safely tucked away underneath my clothes. But I know it’s there, and that’s what matters to me. 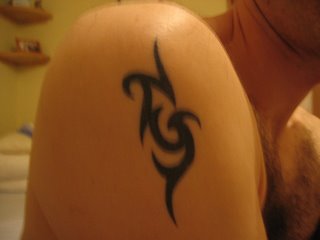 Mind you, I still haven’t told my parents.... It just hasn’t ever really come up in conversation, y’know?
Posted by swisslet at 18:21