One of the worst things about Christmas – certainly on this side of the Atlantic anyway – has got to be the grinding monotony of the music. There is an enormous richness and diversity of music written specifically for this time of year, so why is it that we have to listen to the same twenty songs over-and-over-and-over-again*? Why is it that everywhere you go, you have to listen to the same bloody songs? It’s always “Merry Xmas Everyone” by Slade, “I Wish It Could Be Christmas Everyday” by Wizzard, “Merry Xmas (War is Over)” by John Lennon, “Last Chrismas” by Wham, “Mistletoe & Wine” by Cliff Richard and all the rest of the usual suspects.

Now some of those songs are classics in their own right, and I won’t hear a word said against Slade in particular, but even listening to that has now become a test of endurance through over-exposure. They even managed to take some of the gloss off the incomparable “Fairy Tale of New York” when they let Ronan Keating cover it… There’s clearly money to be made from getting onto these Christmas compilations – if you remember, the hero in Nick Hornby’s “About a Boy” didn’t need to work thanks to his father writing a novelty song called “Santa’s Super Sleigh”. I’ve no idea how much Noddy Holder makes out of his particular number, but for every deserving Noddy, there are other acts who must be praising the Lord for their unbelievable good fortune. Jona Lewie can presumably still not believe quite how lucky he got when he made a passing reference to Christmas in his song “Stop the Cavalry”. It's a song that has little to do with the season, but it has wormed its way onto these compilations and has somehow never yet been knocked off. It's become traditional, you see. It's always on these Christmas Albums, so it will always be on these Christmas albums.

There are thousands and thousands of other festive songs out there that we could be listening to instead – from beautiful medieval carols sung by choirs, through to Ella Fitzgerald, Motown and Phil Spector. Why can’t we listen to them occasionally?

Christmas is also, of course, a time of year when music sales rocket up through the roof as people go out looking for easy Christmas presents. There’s the annual scramble for the Christmas number one (with whoever wins X Factor being the overwhelming favourite - apparently it doesn't matter who actually wins at all). The album charts are awash with Greatest Hits (Oasis, U2, George Michael, Girls Aloud, Jamiroquai, Sugababes) and the kinds of things that people who don’t really buy records will buy (Il Divo, Westlife, Fron Male Voice Choir, Katherine Jenkins, Angelis, G4).

There is some good stuff out there though, and I’ve spend the last couple of days quietly making myself feel almost festive by listening to it.

You should give it a go. Here are a few to try: 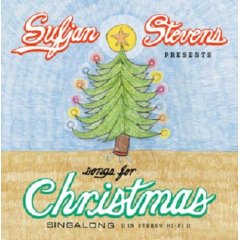 A lovely little boxset of 5 CDs of music originally made each year by Stevens for his family and friends. It’s a mixture of original material and re-interpretations of Christmas Classics. It’s aces. 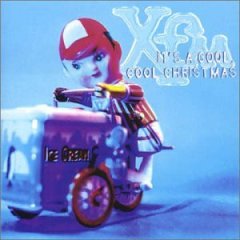 This is Jeepster/XFM compilation album of seasonal songs from 2000 (God, that long ago?) by the likes of Grandaddy, The Eels, Snow Patrol, Belle & Sebastian, Gorky's Zygotic Mynci and so on. Very good and it still sounds fresh today.

Available for a short time only, the latest download in the Sweeping the Nation series of “covermounts” is a fantastic collection of 43 seasonal songs. This features artists as diverse as The Ronettes, The Fall, The Cocteau Twins, Pet Shop Boys, James Brown, Ben Folds, De La Soul, Half Man Half Biscuit, Bright Eyes, Beck.

Go download. You might even be able to enjoy a rock and roll Christmas without thinking of the Welsh Elvis…

Unless you want to, obviously.

* possibly like a monkey with a miniature cymbal.
Posted by swisslet at 18:53