don't forget the songs that saved your life 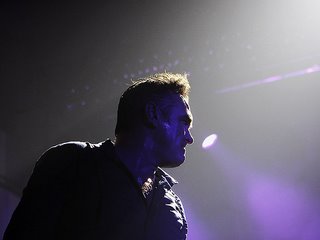 I’m not a big fan of arena gigs: they’re usually just drafty barns with appalling acoustics and expensive watery beer. I suppose that Nottingham Arena isn’t too bad as far as arenas go, but I’d still far rather be watching a band in more intimate surroundings. The last time I saw Morrissey was at the Blackpool Empress Ballroom in 2004. It’s a venue that has a capacity of about 3000, has a barrel vaulted ceiling, a sprung wooden dancefloor and is of course located in the archetypal ‘seaside town that they forgot to close down’ – in other words, it was almost the perfect place to watch the pope of mope. Come Armageddon, come Armageddon come…

That was a brilliant night and it was always going to be hard for an arena gig like this to top it, particularly when the tour is in support of an album (“Ringleader of the Tormentors”) that I thought was a touch lacklustre, however many rave reviews the critics gave it. It might have been produced by Tony Visconti in Rome and it might be drenched in luscious strings, but for my money it wasn’t a patch on the rather lower budget “You Are The Quarry” that announced Morrissey’s triumphant return to the stage and saw him score more top 10 hits than any other artist in 2004.

Still, me and Morrissey go way back, so I was hardly likely to pass up an opportunity to go and watch him performing on my own doorstep – especially when I get to go in the esteemed company of Lord B and Mr. Mark Reed (who is an excellent house guest, by the way). I think it is fair to say that no other musician has meant as much to me over the course of my life as this one. I discovered the Smiths late – about 1992, to be precise – but I fell for them hard and I’m pleased to say that I’ve never quite recovered. The quality of Morrissey’s solo work has sometimes fluctuated wildly (“Roy’s Keane” anyone?) and he may have drifted in and out of fashion with the music press, but he has always, always been a fascinating character and an ever-present soundtrack to my life.

He was brilliant, of course. He burst onto the stage with “Panic” and then followed it up with an even more rapturously received “First of the Gang To Die”, and he never looked back from there. He was on fantastic form, prowling the stage in front of a giant banner of Pier Paulo Pasolini, whipping his microphone lead like a lasso and gesturing furiously as he sang. He even had the good grace to look like he was enjoying himself, stopping occasionally to say hello to a friendly face in the crowd (“Are you alright down there Julia?”) or to hand the microphone over to a chap called Paul, who promptly announced, very seriously, that “I just want to thank you Morrissey for everything”. To Moz’s great credit, he doesn’t take all this adulation too seriously. After another fan had garbled something incoherent into the microphone, he wandered back across the stage shaking his head, “Oh God!”.

The set itself is a good mix of the old and the new. As well as the inevitable clutch of songs from “…Tormentors”, we had a handful of Smiths songs (“Panic”, “William, It Was Really Nothing”, “Girlfriend in a Coma”, “How Soon is Now?”, “Please, Please, Please Let Me Get What I Want”), some classic solo numbers (“Everyday Is Like Sunday”), some b-sides and some of the newer stuff. There were plenty of songs that I was hoping that he would play and he didn’t, but he played more than enough to keep me happy.

I’ve sometimes been critical of Morrissey’s backing band, who I have always seen as being somewhat pale shadows of the shimmering genius of Johnny Marr. Tonight though, they are excellent. New drummer Matt Chamberlain (a former stand-in for The Smashing Pumpkins and Pearl Jam) was endlessly entertaining, smashing the living hell out of his drums and turning occasionally to bang on the enormous gong hanging behind him. Alain Whyte’s stand-in on guitar, former Red Hot Chilli Pepper Jesse Tobias, also added a touch of beef to those sometimes-ramshackle rockabilly beats that Boz Boorer is so fond of. “Irish Blood, English Heart” in particular stood out for me: the band absolutely let rip as Morrissey spits those words out:

“I've been dreaming of a time when
The English are sick to death of Labour
And Tories, and spit upon the name of Oliver Cromwell
And denounce this royal line that still salute him
And will salute him forever”

It’s powerful on record, but it’s twice as powerful here.

Amazingly, Morrissey is now 47 years old, but as he ripped off his shirt during the climax to “You Have Killed Me”, I am pleased to be able to report that he’s looking pretty damn good for it. He’s not exactly rippling muscles, but he’s looking lean and toned - perhaps there’s something in this whole vegetarian thing after all (although don’t tell Mozza about the delicious steak and ale pie with braised savoy cabbage and mustard mash that I had prior to the gig, eh? He might not understand).

Perhaps the set drifted a little in the middle as he played some of the newer material and the attention of the arena crowd began to wander, but otherwise he was on rip-roaring form.

There aren’t many performers like Morrissey still around, so we should make the most of him whilst we still can.

"There is no such thing as normal"

Setlist (approximately, anyway): - Panic / First Of The Gang To Die / The Youngest Was The Most Loved / You Have Killed Me / Disappointed / Ganglord / William, It Was Really Nothing / Everyday Is Like Sunday / Dear God, Please Help Me / Let Me Kiss You / The National Front Disco / I've Changed My Plea To Guilty / In The Future When All's Well / I Will See You In Far-off Places / Girlfriend In A Coma / Irish Blood, English Heart / Life Is A Pigsty / How Soon Is Now? / I Just Want To See The Boy Happy // Please, Please, Please Let Me Get What I Want / Don't Make Fun of Daddy's Voice
Posted by swisslet at 00:01