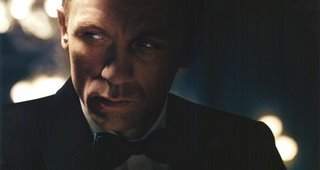 I gave my office Christmas Party a miss this evening and went to see Casino Royale instead. I really enjoyed it. I liked Pierce Brosnan as Bond. He was smooth, he was charming... but most importantly of all I found him believable as a cold-blooded killer. My favourite scene of all of his films comes when he shoots Sophie Marceau in front of Judi Dench's M. We don't see the shooting, but we watch M as she sees the man she has been joking with ("Oh really 007!") coldly kill a former lover and we see the reaction in her face as she realises what kind of man this is. Forget the gadgets, forget the vodka martinis, forget the girls.... for me that was what James Bond is about.

Daniel Craig has this in spades. He is ruthless, but he is also human. When he is punched, it looks like it hurts. He bleeds. There weren't any gadgets, but the film also felt to me like it had a lot more soul than usual.

Don't get me wrong, I grew up with the Roger Moore Bond films and I think I will always have an enduring soft-spot for films like "Live and Let Die", "Octopussy" and "Moonraker". They are very entertaining, put a smile on my face and remind me of bank holidays, and there's absolutely nothing wrong with that. 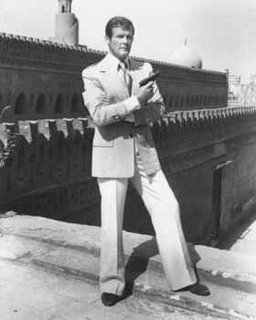 This new Bond is a very different animal indeed though. I haven't read the books, but I've heard that this is a return to the character that appears in the original Ian Fleming novels (of which Casino Royale was the first). If that's true, then perhaps I should check out the source material.

The film isn't perfect by any means - we still have some daft set pieces (a sinking palazzo in Venice?), some clanking lines, a villain who weeps blood and a director who was clearly taking notes when he watched the Bourne Identity.... but it was exciting and for a film that clocks in at 144 minutes, it didn't drag at all (ah - except for all that shocking product placement. James Bond in a Ford Focus? Really?)

Best of all though was Daniel Craig. I think he makes a superb Bond.... blonde hair and all (as if that was ever going to matter to anyone other than the geeks). I should probably hate him really: that Ursula Andress moment when he walks out of the sea in a skimpy pair of trunks had C. purring her appreciation of his physique. Beautiful though Eva Green is, she didn't really do it for me. Sadly.

One thing: smashing the world of illegal international banking and taking $100m from Ugandan terrorists is one thing, but could I tentatively suggest that M put him onto the war on terror for his next assignment? He seems resourceful, so I imagine he'd have some ideas about where to start. The White House?
Posted by swisslet at 23:51