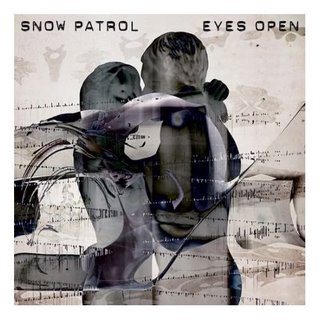 It looks as though "Eyes Wide Open" by Snow Patrol is going to be the biggest selling album in the UK in 2006. Now this is an album that I really like. I'll admit that it took a little while to grow on me; when I first heard the lead-off single, "You're All I Have", I thought it was a bit insipid and seemed to confirm my impression that "Final Straw" was going to be impossible for the band to top. Well, I was wrong. I saw them play a charity gig at Rock City in July and they just knocked my socks off. It is the only gig I have reviewed on these pages that has received a maximum 10/10 review, but it really was the best concert I have been to in a long, long time. When I heard them live, the songs from the new album seemed to take on a new life for me, with the obvious standout track being "Chasing Cars", which had an impact on the whole audience that made the hairs on the back of my neck stand on end. It's a gorgeous song.

And yet why am I not surprised to see the knives out in the press?

I hate the smugness implicit in that statement: our Miranda wouldn't do anything so vulgar as buy the most popular album in the UK, and she's pretty sure that neither would the discerning readers of that illustrious music supplement.

"In late November Eyes Open overtook Arctic Monkeys and became the biggest selling album of 2006 in the UK. Phew: for a while there it was looking like a great record brimming with wit, vigour and originality might actually scoop the top sales prize. Thankfully, good sense has prevailed. Britain can pat itself on the back, having embraced an album with all the texture and edge of a security blanket doused with fabric softener. The commercial honours of the last few years - Blunt, Keane, Dido, even the distinctly classier Coldplay - tell a sorry tale. We see bands as things with which to wipe our tears, where once they were, properly, rabble-rousers, Pied Pipers and volatile party kindling."

Cobblers. This is snobbery, pure and simple. Why is it that there is nothing that the music snob hates more than success? Empire mentions Keane, and they're a good example of this trend. When they were a new band just starting out, they were THE NEXT BIG THING. "Somewhere Only We Know" was single of the week in the NME, of all places. They were hot. And then they were the current big thing, and suddenly no one (apart from the millions of people who bought their album, obviously) wanted to know. How many easy jokes about Keane have you read this year? Keane are laughed at because they are successful and because we music snobs are a little bit embarrassed that we own "Hopes and Fears", because everyone else likes them too. Well, it's bullshit, isn't it? I don't think all that much of "Under the Iron Sea", and I do find them a little bit dull, but they are still head and shoulders above most of the other shit that got released this year. Anyway, weren't the Scissor Sisters the best selling album of 2004, not Keane? Now there's a band that doesn't fit Kitty Empire's mould, what with being almost the polar opposite of Keane and all that....

And anyway, what's this crap about the Arctic Monkeys? They are a breath of fresh air into the charts, it's true.... but is that really a great album? No. It's absolutely not. Give me Snow Patrol any time.

It's okay not to like people like Snow Patrol, Keane, James Blunt and all of that... of course it is... but it's also okay to like a band that becomes unfashionably successful too.

London was great. Busy, yes.... but we managed to fight our way through the crowds to pick up a few presents. We also had a nice meal, stayed in a nice room in a pleasant hotel and we picked up a whole pile of interesting cheeses for the Christmas dinner table from the Neil's Yard Dairy.

The Velázquez exhibition at the National Gallery itself was amazing.

There are four large-ish rooms of paintings assembled from all over the world, ranging from paintings the artist did from the age of 16 all the way through to his last portraits of Philip IV when he was in his sixties. All lined up together, you really get a fantastic opportunity to watch how one of the great masters developed his style.

It's also much more than just a series of portraits of rheumy-eyed, big chinned Hapsburgs...

... although there are a few of those too.

It's on until January, so you've got some time to get yourself over to see it. Highly recommended.
Posted by swisslet at 21:18