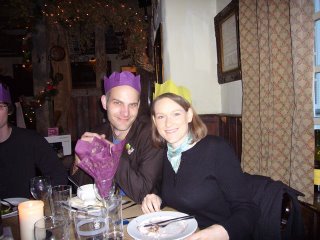 So, this weekend was the 9th Juxom Street Christmas Party. This is an event that started at some point in the dim and distant past when some of my friends began to house-share in Oxford and had a bit of a bash one Christmas. It started off pretty small, cooking a turkey with all the trimmings for about 6 people, but before they knew where they were, it was an annual event with an attendance peaking somewhere around 30 people. That's quite a feat of catering, I think you'll agree, and as the longest-serving guest, I always try to chip in where I can. After both of the hosts became vegetarians, this help most often takes the form of dealing with the meat.... (Oh God, just don't mention the year where Emma and I made everyone wait for about 90 minutes after I discovered that the damn bird was woefully undercooked.... better a delay than food poisoning, eh?)

The meal itself is always great fun, but the real joy of the tradition is everything that goes with it. I always go down to Oxford on the Friday night and we always try (and inevitably spectacularly fail) to have a "quiet night in" before the main event. One year we ended up in the pub with an alcoholic former professional tennis player... but that's another story. Saturday invariably sees me sat in front of "Football Focus" at noon, peeling sprouts with my first beer of the day. The evening often ends (messily, of course) with the hardy survivors of this endurance race dancing the night away at the Zodiac.

It's a brilliant weekend, and I'm pleased to say that I haven't missed a single one since the whole thing kicked off. 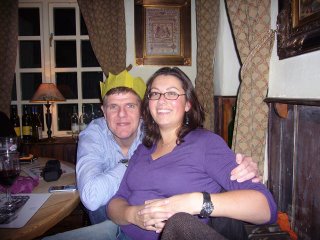 This year was slightly different. One of our main hosts - the poll star - is away travelling around the world (currently in Australia awaiting the start of the third test in Perth). So Statue John was left with the prospect of organising the whole event on his own - not easy given that he isn't currently living in Oxford. He did look hard for a kitchen he could use, but in the end, he surrendered to the inevitable and we were booked into a nice pub just outside Oxford. 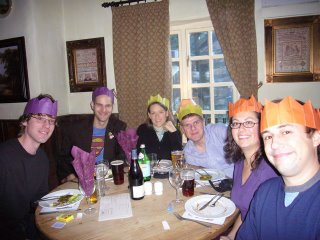 our end of the table

C. and I arrived down in Oxford on the Friday as always and spent a lovely evening with our hosts, Rich & Laura, who were kindly putting us up for the weekend. We had a tasty Italian meal at their local restaurant and then moved on for a few pints of "Winter Warmer" and a few games of "Bullseye" on the quizzie. 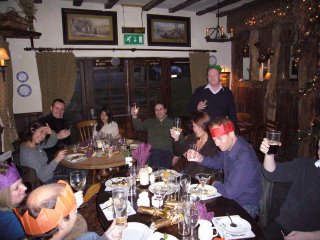 A quick run on Saturday morning and then it was off to the venue and the start of the marathon. I missed the 12 o'clock curfew and ended up having my first drink at about 2pm, which was perhaps for the best, really. A good number of people made the effort (I think we had about 15 or 16 in all) but I did spot a few shandy drinkers. Well, at least they were there, and none of us are getting any younger. Of course, we all raised a glass to absent friends. 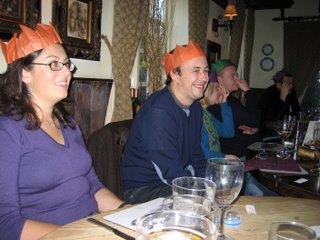 Statue John in his element

What more can I say? It was an extremely pleasant way to spend an afternoon, and retiring to the "Angel and Greyhound" for some more "Winter Warmer" was an excellent way to spend the evening too.

Christmas with my mum and dad is all very nice, but this is now definitely the main event for me: spending time catching up with some of my oldest friends. That's what christmas parties should be about. 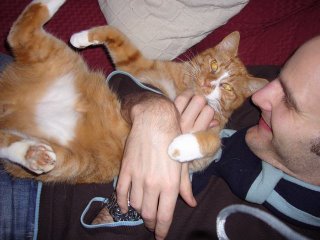 As if that wasn't enough, I think I made a new friend.

See you all in 2007, I hope... It's slightly weird that my attendance record has now overtaken one of the hosts, but I'm sure he'll be back next year.
Posted by swisslet at 21:25