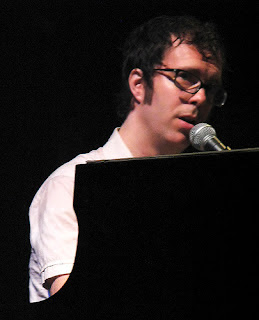 The worst party I have ever had the misfortune to attend took place in Mapperley Park in Nottingham some time in the summer of 1998. It was at the house of a colleague of mine and as well as having a chance to relax in the sun and enjoy a BBQ, it was going to be an opportunity to finally meet the wonderful boyfriend she had been bragging about for so long. I was driving, but hey! I don’t need to drink to have a good time!

It was an absolute nightmare. The Wonderful Boyfriend was accompanied by a number of his friends, and they all – every single last one of them – thought that they were intellectual giants. At first I found it amusing when they started to have an ever-so-serious conversation about the existence of God and the meaning of Life, but it quickly dawned on me that they were being very serious and were attempting to have some sort round the table philosophical discussion. I don’t think my flippancy went down well – these people took their pretensions seriously – and before long I couldn’t help but notice that these clowns were trying to make out that I was some kind of feeble-minded fool for not taking part in their grand conversations. Yeah, whatever. You guys are the deep thinkers here and I’m the moron. I started to feel very sober and trying to calculate how early I could slip off home without offending my friend, but how much longer I could stay without actually killing anyone.

Just when I thought things couldn’t get any worse, an acoustic guitar appeared. Oh God. Wonderful Boyfriend then proceeded to play a selection of songs that everyone (except me) gleefully sang along to. The songs chosen for this impromptu sing-a-long? They were exclusively by the Ben Folds Five and the Barenaked Ladies.

I’d come across both bands when I was a student, but after this rather traumatic experience, I simply could not abide either. It wasn’t so much their music, it was the fans. Those pretentious, stuck up, odious little morons who thought they were so damn clever came to sum up people who liked the music of Ben Folds. They listened with a knowing smirk on their faces as they enjoyed a joke that none of the rest of us quite got. I wanted to take the inverted commas they always spoke in and ram them forcibly up their fundaments.

it took me until 2005 before I was sufficiently over this to actually go out and buy some Ben Folds records. I now own “Whatever and Ever Amen”, “Ben Folds Five” and “Rockin’ the Suburbs”. I quite like them. I still find Ben Folds to be a little smug, but I also know that he has written some good songs.

I was still a touch nervous about seeing him live though. Never mind what the music was going to be like: what about the fans? We popped into a pub near the venue for a spot of tea, and the first person I saw was a slightly geeky looking guy wearing a 2004 Divine Comedy Tour t-shirt. The Divine Comedy? Hmmmm. Clever-clever, knowing, ironic, wears his learning heavily upon his sleeve… yeah, that would figure. I steeled myself for a venue full of these people, and fought to keep the memories of that dreadful party under control.

In the event, it wasn’t that bad. There were one or two smug looking people around, but actually the crowd was maybe a bit younger than I was anticipating, and although I was wearing my Iron Maiden t-shirt, I also caught show of support for AC/DC and the Scorpions. Were they ironic statements, or was it okay to like both rock and mainly piano based smart arsed collegiate boogie-woogie? (that’s my term, by the way, I’m not sure you’ll find it on wikipedia). The support was some insipid idiot in a white suit doing an ironic cover version of “beautiful” by Christina Aguilera. Yup… that figures too. Still we missed most of him, and then settled in to wait for the main act, who sauntered onto the stage to “The Final Countdown”. Yup.

How was the show? Well, it was alright. I was mildly annoyed by the long and clearly rehearsed number about Wolverhamton (amended accordingly, I assume this is used every night), and I got a bit cheesed off at the “comic” use of sound-effects on a little synthesiser, but basically Folds is quite entertaining, and several of his songs – the ones where I don’t think he’s trying to be clever and is singing from his heart – are quite touching. Other songs I can well do without: the most rapturously received song was his cover of Doctor Dre’s “Bitches Ain’t Shit”. I suppose the point of this is to highlight how appalling those lyrics are by stripping them of their original context and presenting them to a lovely piano melody. Yes. Very clever. The thing is though, that the longer this went on, the more I started to feel that Folds was not only satirising the lyrics, but was being quite snobby and superior to the culture that produced them. This impression was solidified when Folds threw in a comic “motherfucker” towards the end of the song. I’m hardly a Dr. Dre fan, yet somehow the whole thing made me feel distinctly uncomfortable and had an unmistakeable air of smugness and cultural superiority about it. It was… well, it was just so white and middle-class. That aside though, the gig wasn't too bad.

My main problem with the show was the two guys standing immediately next to me. They were both fairly young (maybe early twenties), but they did their best to ruin the show for everyone around them by singing (actually, bellowing) loudly and slightly out of tune to every song they knew, and by talking through the rest. At the end of each song, one insisted on doing those really piercing wolf-whistles right into my ear. They were clearly having a brilliant time, which is good, but they were also completely oblivious to everyone else around them. They kept turning to each other and remarking how ace the gig was and how clever Folds was, and I couldn’t help but be reminded of Wonderful Boyfriend. I shot them a few death stares, which they missed, but in the end, the solution was simple: I left them to it and went to watch the show from the edge of the room whilst leaning against the wall. I think it’s fair to say that I was able to relax into the music a little bit more when I was out of their range.

So how was the gig? This is a tricky one. I was bored for bits of this gig, and I hated some other parts, but the thing is that I actually think that Ben Folds is pretty entertaining. He can’t help that I find some of his fans insufferable, or that the guys that I was standing next to were particularly annoying, or the fact that I was pretty tired. He did what he does, which is entertain a crowd with a pretty decent live show. He plays his songs well, he is about as dynamic as you can be behind a piano, and he engaged well with the crowd, both in conversation and in some quite cool direction of crowd participation in some songs. He’s also a pretty good song-writer. I just wish he would drop the inverted commas more often.

(and thanks to Sarah for the ticket and to Lord B and Hen for the lift and the company!)
Posted by swisslet at 17:20