in which our heroes watch coffee being made, take a power-shower beneath a waterfall, enter the circle of 'Cuarenta' initiates and learn that knowledge is power..... 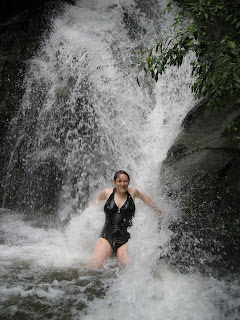 I wake up in a log cabin in a place called Nangulvi and with the sound of the rapids of the river Intag rushing downstream just behind me. The bed isn't the most comfortable in the world, but after 4 nights on a thermarest mat in a tent, it feels just dandy. We get up and head next door to the thermal pools for a dip before breakfast. One of the pools is fed directly from the surrounding mountains, and although it is a slightly brown colour, it is wonderfully refreshing (although let's be honest here, I spend most of my time wallowing in the really hot pool). After breakfast, we climb into the Land Cruiser with Ivan and head off to a local Coffee Plantation. In common with many latin american countries (and other countries around the world), the coffee growers in Ecuador have historically been screwed by the big coffee buying companies: prices have varied wildly and there has been virtually no guarantees that it will be a worthwhile exercise. The growers in the Intag region have taken a stand against this and have formed themselves into an association. Growers join the association and immediately benefit from a pooling of knowledge and expertise, access to cheap supplies and plants, and -- most importantly of all -- to fixed prices for their coffee. In return, the coffee association expects the growers to meet some very strict standards for their plants: all plantations must be strictly organic and only the very best coffee beans will be selected for processing. When they are dried, the beans will be carefully separated into three standards (each with a different price) and all the individual beans are then carefully examined by hand for any kind of defect. A bean that is defective in any way is rejected. In this way, the quality of the Rio Intag coffee is assured.

When we arrive at the plantation, a meeting of the cooperative is well underway, and the local growers are sat outside around a flip chart and carefully listening to a lecture on growing techniques. We are introduced to the brains behind the cooperative (a lovely chap), and learn how he has sometimes been forced into hiding and hunted by men with guns. Apparently there are people who don't like the idea of the local community getting organised and making a stand against big business. Not surprisingly, this cooperative of coffee growers has also been a prominent part of the local resistance to central government plans to allow a big Canadian mining company access to the area to carry out open cast mining for copper. So far, the miners have been kept out.... but for how long? They are also currently gearing up resistance to another plan to dam the river for a Hydro Electric Power station. The dam would flood much of their land and would remove what is a very attractive spot. We wander around the farm and I sample a coffee berry straight off the plant. All of the coffee plants themselves are sheltered from the sun by larger plants - banana palms, lemon trees, avocados... all of which provide the farmers with a handy second income. 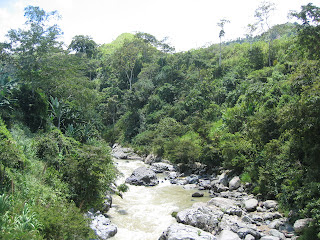 The Intag river - would you want a dam built here?

From here we drive up to Apuela, the main town around these parts, and we head over to the offices of the Coffee Association itself. From here, Franklin shows us how the beans are separated from the husks, how the coffee is sorted, quality checked and then how it is roasted. Rather to my horror, I learn that one of their biggest customers is Nestle.... not for the coffee, you understand.... Nestle are interested in buying the husks, which they use to bulk out Nescafe. Think that's bad? Wait until you hear this: there are several reasons why a coffee bean might be rejected. It could be because it's slightly soft, or because it has mould, or even because it is showing signs of insect infestation. All of the rejected beans are collected together, but they are no binned. Why are they not binned? Because Nestle buy them too and chuck them into Nescafe too. Think on that the next time you are thinking of buying a jar of Gold Blend. All that remains is to buy a few bags of coffee to take home. We watch as Franklin takes the beans straight from the sack, grinds them for us and then seals them all up. It doesn't really get much fresher than that. Look out for it: Rio Intag coffee. Organic. Fair Trade. Delicious.

On the way home, Ivan kindly stops so I can make a call to my parents to check on my dad. The good news is that he's now out of hospital and back at home. The even better news is that when I enquire about his health (a subject that is uppermost in my mind), all he wants to talk to me about is how my company has been the subject of a management takeover bid (I don't care) and that Ecuador has just been featured on some holiday programme or other (mildly interesting). Reading between the lines, I think he's going to be okay...at least for the time being.

After lunch, we take a short stroll up behind the cabins to a waterfall that is cascading down the mountain. This is an unmissable opportunity to take a shower and have a nice massage all at the same time. God knows how many pounds of pressure are in that water, but it's quite a feeling to slide underneath the stream and then try to hold yourself in place as the water tries to push you down the hill. 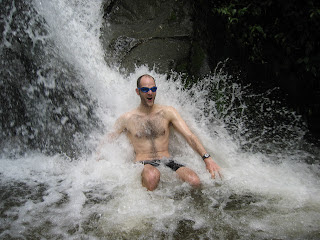 After that we have an easy afternoon, wallowing in the springs, reading and learning how to play a very Ecuadorian card game -- "Cuarenta" or "forty". You can follow the link to read about the rules, but this is the Ecuadorian national game and I have never played a card game before that allows such free expression of the latin spirit. Cards are slapped down on the table from a great height and there is much bravado and shouting and general excitement. 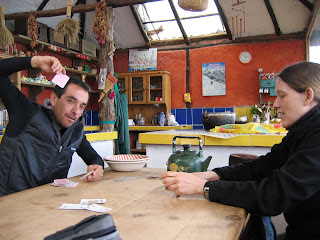 It's tremendous fun, although I am paired with Ivan's youngest son, Pablito (the family have travelled down from Otavalo to spend the weekend with us), and we have absolutely no luck at all and get roundly trounced in every game that we play. Happily, in spite of the fact that we play this game nearly every night from now on, this is the last time that I am to taste defeat until we get to the Amazon (and under no circumstances am I to dwell on the 10 point fine for a misdeal that caused our defeat there.... that's all in the past now)

It's certainly nice to have a relaxing day after all of the exertions of the trek.

We're off back into Apuela this morning, this time to call in at the offices of the "Intag" local newspaper. This is something that started up a couple of years ago and is mainly staffed by volunteers. Their aim is to provide news for the local community and to give them a voice. Just like the coffee association, they have been a focal point for galvanising (or at least informing) the local community about some really serious issues like the plans to rip up the landscape for open cast mines or for dams. The print run isn't very large, but each copy is avidly shared around the community and word quickly gets around. The team we met in the office are a slightly odd mix of an American ex-pat editor, an Italian volunteer, a Colombian and a local girl, but they all have a great light of enthusiasm shining in their eyes. We learn that the paper is supported by the work of volunteers and with the help of grants from various organisations and individuals across the world. We ask why the paper has a cover price at all (it costs 25c) and we are told that it is vital that the paper is seen as having an intrinsic value and isn't just seen as propoganda. The mining companies apparently distribute free papers all of the time, but because they are free, the people see no worth in them. The cover price is purely symbolic. It's quite inspiring actually.... it's little things like this that will help the people here to understand some of the issues that are facing them and to help them to make informed decisions that may help to preserve their way of life and their environment (one issue featured a report from a town that had also had an open cast copper mine - it was an ecological disaster zone.) Informing people like this is tremendously powerful.

In the afternoon we head out on a long drive across some wonderful unsealed roads as we head over to Mindo. The journey takes us something like 3 or 4 hours and although we travel about 70km along the road, we only go about 35km as the condor flies. 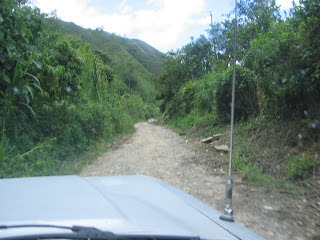 Initially we track along the Intag valley, but soon we are ducking up and down small mountains as we cross through several other valleys. We are going to Mindo because it is the birdwatching capital of Ecuador: the little spot of cloudforest above the town is said to be the second best place in the country for spotting the largest variety of birds in the shortest space of time (after the Amazon). It's not really much to look at, to be honest, but the hostel we are staying in is simple but well appointed (it's got a washer and a drier, for starters!). In the garden at the back are a number of bird feeders that are filled with sugared water.... flocking around these are literally hundreds of hummingbirds. It's not an entirely natural scene, but it's impossible not to be captivated by the chance to look at these magnificent birds. There are probably about 8 or 9 different species here. As they hover over the feeders and jockey for position, it's not terribly hard to see why these birds were the inspiration for the original design of the helicopter. 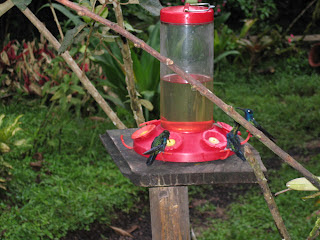 In order to see the birds tomorrow, we're going to have an early start, so after a quick wander around the town, we have a couple of quick games of Cuarenta and have an early night. Ian and Val, our travelling companions for this leg of the journey seem somewhat distracted.... they've received an email from their bank telling them that their account has been the subject of multiple logon attempts and so their account has been suspended, and would they mind confirming their security details.... it's a phishing attack, of course, but before I have had a chance to confirm this for them (and the word "Lloyds" is spelt wrong in the email, for starters) they rather think that they *might* have already submitted their details....ooops.

I lend them my phone so that they can try calling the bank tomorrow. I hope no Nigerian businessmen email them in the meantime.

Tomorrow's all about the birds.... 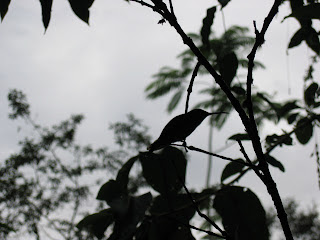