smiled with the risin' sun.... 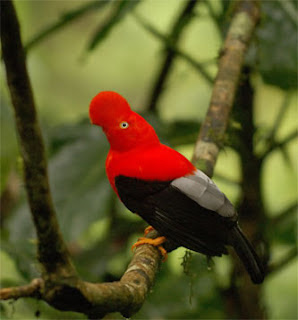 Apparently you have to get up early if you want to go birdwatching. This may explain why my serious interest in this kind of thing waned when I was about 13. Still, it would seem foolish not to make the most of this opportunity to go and have a look at some of the more exotic and colourful birds in the world. We head up into the cloud forest with Ivan and a birdwatching guide called Marcello, and for the next three or four hours, we walk slowly up into the hills stopping occasionally to gawp through Marcello's telescope at some remarkable looking bird or other.

I know I said I wasn't going to type up a list of birds, but I'm going to make an exception here just to give you a flavour of how much we saw in that relatively short space of time:

Do you see what I mean? I was particularly taken with the toucans myself - what an incredible bird to actually see in the flesh. 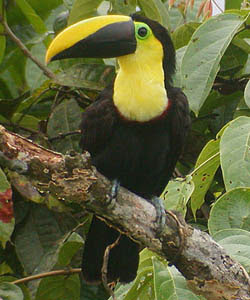 At the top of the hill, we take a ride in an incredibly rickety open cable car over a ravine. Ian kindly points out when we are about halfway across that there is no safety cable, but somehow we make it across and back in one piece. We then head down the hill and pay a visit to a butterfly farm. I'm sure this is all very interesting, but to be honest my attention is somewhat taken by the discovery that C's memory card is saying that it has no images. Given that this was the camera that we used to take almost all of the pictures of the trek, this is something of a blow and it hits me quite hard. Suddenly I have absolutely no interest in putting a bit of melon juice on my hand and in trying to get a giant butterfly to perch on my fingers. All I can think about is how all those photos of us playing football with the Pinyan, of us on top of the mountain on my birthday, of the birthday cake, of us on the horses at the lake.... they're all gone. It takes me a good couple of hours to recover my sense of humour and to remember that at least I experienced all those moments and that they will forever be locked into my brain.

After the butterfly farm, we go tubing down the river. 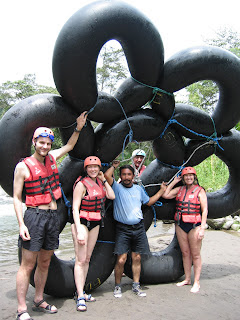 This essentially involves sitting on some lorry inner-tubes that have been lashed together and hanging on for dear life as they are pushed onto some river rapids. It's quite tame really, but it's a lot of fun, and Ivan (bless him) goes to extraordinary lengths to chase us down the river in his car so that he can take some photos.... we're quite short on photos now, of course. 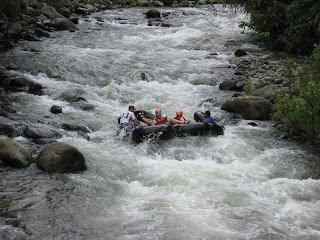 After the early start, we have a "power nap" for a couple of hours in the afternoon and then we gather together for a trip to a "frog concert" (I keep trying to suggest that it should be called the "frog chorus", but Ecuador appears to have missed out on that particular pop classic). It sounds like it will be of minimal interest, frankly. How long can you stand and listen to some frogs chirping? Actually, it's quite impressive. We head just out of town and down to a little hostel that is surrounded by a couple of man-made pools. Our host, Bernardo, greets us with some wine and then takes us on what is essentially a nature-walk through the dark. We hear something in the region of 13 types of frog, but we also get to see things like a waterspider, luminous funghi, some massive cockroaches, a preying Mantis and an extremely cute German Shepherd puppy. We try telling Bernardo that calling this a "frog concert" doesn't do it any justice at all, but he clearly likes the name and isn't going to be shifted from it. Oh well. We head back into Mindo for dinner and few more games of Curarenta (again, I am decisively victorious!)

Essentially a travelling day. We leave Mindo behind us and head up towards Quito, pausing briefly at Mitad del Mundo, where we fight our way past the other gringos to get our photo taken at the monument marking the equator. It was here that a French expedition in the nineteenth century conclusively proved that this was in fact the equator. They were nearly right - there is a native site a few hundred meters from here that has been in place for thousands of years. Needless to say, they had it right all along and the monument is actually in the wrong place.... 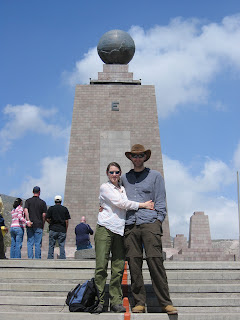 It's a bit of a tourist trap though, so we have some ice cream, take some photos and move on. 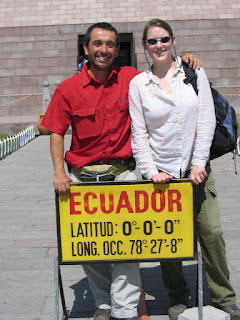 In Quito (that's another UNESCO World Heritage Site off the list then) we take in a bit of culture by visiting the house of the artist Oswaldo Guayasamín. I'd never heard of him, but apparently he was one of the most important artists in South America. We visit his grand (but unfinished) Chapel of Mankind. It was intended as a secular riposte to the Sistine Chapel, focusing on man's treatment of man, and it's a very powerful statement. Guayasamín's images capture the political oppression, racism, poverty, and class division found in much of South America and as a result it's spectacular, sometimes harrowing but not really very cheerful. 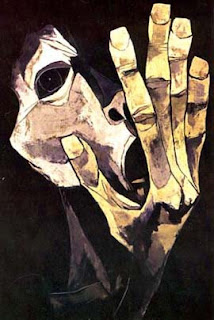 After this we head down into the Old Town and check out the Catholic bling of San Francisco and the main Jesuit chuch. As you might expect, every surface is either smothered in gold or in pictures of hell (where people strangely seem to have mainly indigenous faces). Mind you, in spite of this ostentation, there is also evidence of a subtler and altogether more pragmatic hand: the churches are often built on the sites of ancient temples, and if you look closely, Inca symbols and motifs can be found all over the interior and exterior decorations. Fire and brimstone is all very well, but those early catholic settlers were well aware that they would need more than that if they were to really win the hearts and the minds of the locals. We see this again later on when we visit Banos, where the traditionally female volcano has been totally hijacked by the Catholic Church into a cult of the Virgin Mary. They may have caused untold misery here over the centuries, but you really have to take your hat off to them sometimes, don't you?

We check out the changing of the guard at the presidential palace, later learning that this was actually the scene of some violent protests that very morning - a small constitutional crisis has been brewing since the new president took office and set the wheels of a referendum on the constitution moving -- he's taking a stand against an unpopular and corrupt parliament, and needless to say, the parliament don't like it very much - especially not when 57 of the 100 members are sacked for refusing to recognise the legality of the planned referendum.... We then head off to belatedly back up our cameras, get back in the car and to head the 2 hours or so down towards Cotopaxi.

When we arrive, the volcano is shrouded in fog, but after the long drive, it is an absolute pleasure to see that our hostel has open wood fires in every room. Now that's what I'm talking about.... 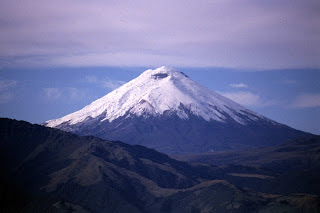 Cotopaxi - as we never quite saw it

When we arrived in Ecuador, I was undecided about whether or not we should attempt to climb to the summit of Cotopaxi. On the one hand I had heard that this wasn't actually that difficult a climb and was possible without any real experience. On the other hand, the volcano is 5,897m high and you need to have crampons and ice-axes and things to get to the top. Whilst we were on the Pinyan trek, Ivan showed me a booklet detailing what you have to do to climb -- you have to climb up to the refuge at about 4,500m with your sleeping bag. You sleep in the refuge until about midnight, and then you set off on the 6 hour climb to the summit. The reason for the early start is that you will have to cross some snow-bridges, and these become notoriously soft as the day goes on. Once you get to the top, you hang about for a bit and peer down into the crater as it belches sulphurous clouds, and then you head back down. The whole thing will take at least 9 hours and is physically very demanding. I thought I was probably up to it, but in the end decided that I wasn't in Ecuador to kill myself, and basically had no need to put myself through that. We decided instead that we would satisfy ourselves by climbing up a bit from the refuge. On Ivan's advice, we went up the south side and based ourselves in the Cara Sur refuge -- this is relatively new, and most people go up the north side, so we had the entire mountain to ourselves. 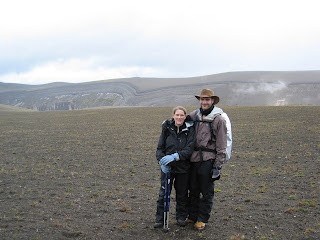 The remains of some pyroclastic flows...

It was raining when we arrived, so after a short delay and a few hands of Cuarenta as we waited for the clouds to clear, we headed up the volcano. Pretty soon it started to snow, and before long we were actually walking in the snow line itself. 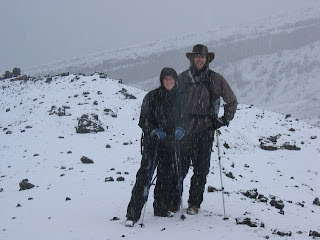 "I thought this was supposed to be the tropics, dammit..."

By the time we reached the camp that is used for assaults on the summit, we were all tired, cold and wet. We were at 4,750m - just a little shorter than the summit of Mt Blanc - and that seemed plenty high enough to me. We had a mug of coca tea and then began the descent. In all, it took us something like 4 hours and 40 minutes. I have nothing but admiration for anyone with the energy to climb further. I was knackered and that was more than enough for me. 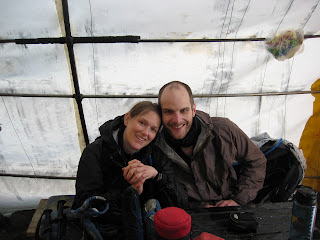 I slept very well that evening.