well how objective can I be? 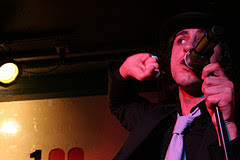 I was first tipped off about Maximo Park at some point in the spring of 2005 by a colleague of mine who suggested that I go and check them out at Glastonbury. A member of the band was mates with her brother, apparently, and she'd heard from him that they were very good. I made a mental note to go and have a listen, but when it actually came down to it, the new bands tent was an awful long walk through the mud from the Other Stage, and I never quite made it. I bought "A Certain Trigger" pretty soon after my return, and almost immediately I regretted my laziness. Since then, Maximo Park have topped my "must see" band list.

It was unfortunate then that I was away on holiday when they released the tickets for the tour to support the release of their new album, and by the time I returned it was completely sold out. As I often do under these circumstances, I logged onto Ebay to annoy myself at the prices that the touts were selling them on for.... I had just resolved to forget about it and to hope that they played Glastonbury again this year, when for some reason I decided to have another look on Ebay. It was now about 3 weeks before the gig, and I was pleasantly surprised to see that there were tickets available for as little as £15 including postage and packing. Given that the face value of the ticket (before booking fee and postage) was £13.50, this seemed oddly reasonable. I swallowed my principles and bought a pair of tickets and hoped they were genuine.

Sarah and I arrived just as the support band were finishing their set. It's perhaps unfair to judge them on the basis of one-and-a-bit songs, but they sounded a bit like a shoutier and less talented version of Carter USM, and on that basis I wasn't sorry to have missed out on the rest of their set. Anyway. Maximo Park arrived onstage at a little after 21:30. Paul Smith apart, they're something of a nondescript looking bunch: they've all got short hair and wear jeans and t-shirts. They don't really look like rock stars at all. Paul Smith, of course, is something different. He's wearing a fancy shirt and jacket, and tonight his rather peculiar brushover hair is hidden underneath a bowler hat. He's a magnetic presence onstage too... partly because the rest of the band don't offer much in the way of onstage movement, but also because Smith is a genuinely mesmeric front man. Such is his intensity that he frequently looks demented as he struts and jumps his way around the stage, pointing and gesturing into the crowd and at the sky. We are eating from the palm of his hand almost from the very beginning.

They're a good band to see live. In some ways they remind me of Bloc Party: their music is slightly spiky, but it is also relentlessly uptempo in a way that makes you want to jump up and down. I think that Maximo Park warmer and more likeable than Bloc Party though - their songs sound more personal and less opaque; where Bloc Party are driven by the staccato drumming of Matt Tong, in Maximo Park, the surge of the bass and guitar are always tempered by the persistent melodic drive of the keyboard. "Our Velocity", the lead single from new album "Our Earthly Pleasures" is played early on and is an absolute triumph. I've always liked the song, but heard live it sounds like far less of a retread of "Apply Some Pressure" and much more of a pumping anthem in its own right. The crowd rightly go wild. The rest of the set is a mixture of old and new material -- all rapturously received with the exception of a b-side that the band clearly adore but which most of the crowd don't know. Smith sagely notes the muted response and I wouldn't be surprised if it was dropped from the setlist before too long. Amidst favourites like "Going Missing", "Graffiti", "Postcard of a Painting" and "The Night I Lost my Head", the new material stands up remarkably well.... in fact, the new material actually in many cases sounds stronger. As well as "Our Velocity", other standouts include "Girls Who Play Guitars", "Books From Boxes" and particularly "Unshockable" (whose riff sounds uncannily like "The Boys Are Back in Town" when played live in a way that it doesn't when heard on record). 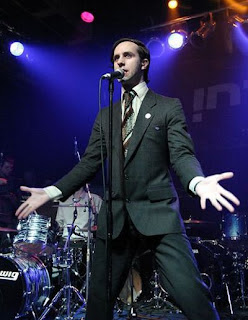 It's a good set, but I have two complaints. The first is that they play for too long - about 90 minutes. They could easily shave 15 minutes off that and they wouldn't lose any momentum. Their material is good. They no longer have a need to play b-sides. If they are on the festival circuit this summer, I imagine that their 45 minute festival set will be sensational. The second complaint, and by far my biggest disappointment of the night is their most famous song.... I noticed the other day that "Apply Some Pressure" is apparently now my "most played" song in iTunes. Girl has written about how it is a great song to run to, and I have to agree with her. It's an absolutely fantastic record: it has the most tremendous sense of urgency and it pumps and drives its way straight out of the speakers and into my head (for the record, whilst I think Paul Smith is a fine looking fellow, I'm afraid I don't share any of Girl's ambitions in that direction...). Tonight, what should have been the crescendo of the gig is, for me, something of a letdown. It's not the band make a mess of it, or that the crowd doesn't go absolutely mental when they hear the first chord... it's just that it seems a bit sloppy in comparison to some of the newer material. Tonight, it just doesn't hold a candle to "Our Velocity". It's only a small quibble, but I can't help but feel disappointed.

The verdict? A good set by a good band... and I'm very glad that I was there... but I think they can do better.