and did they get you to trade your heroes for ghosts? 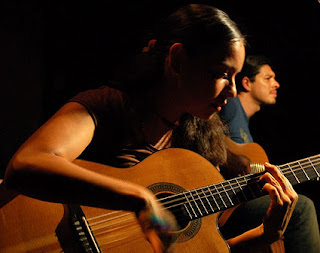 How many acoustic duos could you name that list their key influences as being Metallica, Megadeth, Slayer, Testament and Overkill? How many gigs featuring only two acoustic guitarists would attract a substantial number of heavy metal fans? (I'm pretty sure that not all that many classical music fans go to metal gigs, but I suppose I could be wrong).

Welcome to the wonderful world of Rodrigo Y Gabriela.

I have Statue John to thank for hearing about this band - he's been raving about them pretty solidly for about a year and has been to see them several times. I was resistant to the idea of them for a while, but in the end my resistance was futile. I only had to listen to "Tamacun" and I was a goner. It was then only a matter of time before I was out buying the album and buying the tickets to this gig. I like the heavy metal angle (and their cover of Metallica's "Orion" is an absolute joy), but C. is a classical guitarist, and she loves them too for the virtuosity and sheer exuberance of their playing. Sadly, C. is in Switzerland at the moment and wasn't able to make the gig. Luckily Sarah was more than happy to step into the breach, and we were also lucky enough to bump into Mike, at the gig for both business and pleasure (his review should be appearing in the Nottingham Evening Post tomorrow....)

The album is great, but live these two are just superb. Rodrigo is an outstanding guitarist in his own right, but Gabriela is just something else. She may be a delicate looking thing, but my God she's a force of nature: she plays the guitar like a whirlwind, often forsaking her pick to attack the strings with a blur of fingers, all the while hammering her guitar with the heel of her hand as though it were a drumkit. She produces sounds that I have never heard coming from an acoustic guitar before, and her duelling exchanges with Rodrigo are just out of this world. As well as looking a touch like a hispanic Chris Cornell, Rodrigo looks like a rather more orthodox guitar player to my untrained eyes, but he is clearly also a frustrated rock star: he embraces all those big metal riffs (and tonight, as well as lots of Metallica, we hear some White Stripes, Deep Purple, Led Zeppelin and...er... Dave Brubeck) and he positively rejoices in all those intricate, fiddly-widdly solos. Superb, and the crowd absolutely lapped it up. We also get an extended crowd singalong to "Wish You Were Here" by Pink Floyd, which almost brings the house down.

R&G are quite interesting enough, but they are also the first band I have seen performing at Rock City who have big screens up showing close-ups of their fretwork. I've seen people play the Arena without screens, and this acoustic two-piece from Mexico via Ireland turn up at Rock City with the full works. It's a good effort. Their light show wasn't too shabby either, and I particularly enjoyed the bit where they used strobe lighting during their cover of "One" at exactly the same time in the song as Metallica do when they play it. A nice touch, I thought.

They play for a good 90 minutes - and they are spell-binding throughout - but I think it's only fair to report that Rock City was not quite sold out, and some sections of the audience seemed to think that the gig was a great opportunity to have a chat with their mates, raising their voices as the music inconvenienced them. It annoyed me, and I think on occasion it might even have prompted R&G to crank up the volume a touch. It didn't manage to ruin the concert for me, but it was certainly an irritating background presence. Sometimes they would interrupt their conversation to applaud the band for the song they had just been trying to play. Why do these people come to gigs?

What a great show. I really hope they are on the bill at Glastonbury because I think C. would absolutely love to see them live.... they're actually supporting Muse at Wembley later on in June, and they definitely won't look at all out of place on a stage that big.

Catch them if you can. In the meantime, here are some YouTube links: